On May 1, 1920, the Boston Braves hosted the Brooklyn Robins in a National League matchup. Brooklyn was in second place in the National League boasting an 8-4 record. While Boston, on the other hand, was off to a bit of a slow start at 4-5. In front of 4000 fans at Braves Field, it was supposed to be just another good' ol day at the ballpark. No one in their right mind, however, could have ever imagined they would be part of baseball history.

It was the story of two titans on the mound, as the Braves' Joe Oeschger squared-off against Brooklyn’s Leon Cadore. After Brooklyn scored in the top of the fifth to take a 1-0 lead, the Braves tied the game in the sixth on a Tony Boeckel single. With the game now tied 1-1, Rabbit Maranville stepped up to the plate and doubled off Cadore. With aggressive base-running, Boeckel tried to score from first base, but was taken out at home on a great relay play from Hood to Cadore to Krueger, denying the Braves from taking the lead. It would turn out to be a key out for the Dodgers as the game ended up as a masterful pitching duel. 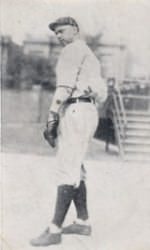 The out at home from the Dodgers set the tone for the rest of the game, as neither team would be able to score again. Finally, after 26 innings of play, the game was called on account of darkness, ending in a 1-1 tie. The most impressive part of the game was the pitching, as both starters pitched the entire 26 innings. Leon Cadore scattered 15 hits, walked 5 and struck out 6 batters for the Dodgers. Boston's Joe Oeschger was even better allowing only 9 hits, while walking 4 and striking-out 7 batters.

The May 2, 1920 Boston Globe describes the tension and excitement that had taken place the previous day:

"Twenty-six innings and the score 1 to 1, when the game was called on account of darkness.

Baseball history was being [made] at Braves Field yesterday when comparatively few believed it would be possible to even start, let alone to play, even an ordinary game. A new world's record in major league baseball was made, the longest previous game on record being played in Boston by the Boston and Philadelphia teams of the American League, Sept. 1 1906, but that one went only 24 innings.

Joe Oeschger of the Braves and Leon Cadore of the Robins pitched the full 26 innings, and undoubtedly established a record which will stand as long as they live.

It was one of the greatest games ever played, but on account of the threatening weather only about 4000 of the faithful turned out to see the game.
...
It goes without saying that every one of the 4000 remained to the end. They say the most wonderful pitching stunt ever performed, and some classy playing in thrilling situations, such as one sees only once in a lifetime."

It was a Hall-of-Fame performance by both pitchers in what still stands today as the longest Major League Baseball game ever played.