"Anne Bradstreet, a lady born in England, the contemporary of John Milton, was the first of our professional poets, and won fame above all other American writers of her time. Daughter of one Puritan governor [Thomas Dudley], and wife of another governor [Simon Bradstreet], she had every opportunity for influence that eminent social position could give. Moreover, she had heroic qualities. In spite of feeble health she reared a large family amid the trials of the wilderness, and by her industry and talents compelled the austere Puritans to recognize in her the most accomplished and most influential woman of New England. Their praise of her was lavish; they named her The Tenth Muse.

The first edition of her writings, printed in 1650, aroused such pride among the colonists as no other writings had called forth. The volume contained a series of poems, with four related themes in each poem. Its title, worthy of attention for its unique stateliness, reveals ambitious effort. The title is:

The Tenth Muse lately sprung up in America; or, Several Poems, compiled with great variety of wit and learning, full of delight. Wherein especially is contained a complete discourse and description of the four elements, constitutions, ages of man, seasons of the year; together with an exact epitome of the four monarchies, viz., the Assyrian, Persian, Grecian, Roman; also a dialogue between Old England and New concerning the late troubles; with diverse other pleasant and serious poems: By a gentle woman of those parts.

The somber quality of Mrs. Bradstreet's verse was not peculiar to her; it was the mannerism belonging to all the Puritan writers. Her themes, historical and scientific, give her frequent opportunity for religious reflection. In Contemplations, a poem written later in life, she rids herself of some of her earlier mannerism, and displays greater freedom of poetic feeling." 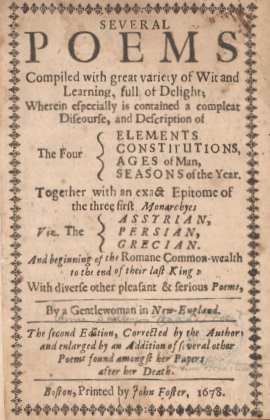