On January 20, 1971, a large fire took place in East Boston that destroyed a popular entertainment complex called the "1800 Club." Ken Harrelson, the famous baseball player and broadcaster, was part-owner of the complex. The fire also severely damaged a three-quarter scale replica of Donald McKay's clipper ship Flying Cloud that was moored next to the club. The vessel was used as a floating cocktail lounge. The estimated property loss was $1 million dollars, a huge sum at that time.

The 1800 Club was located at the end of Lewis Street in East Boston. A pier was built for the nightclub, with an L-shaped concrete boardwalk. A large single-story building was constructed on the wharf, which contained dining areas, bar, and private rooms. The club was located opposite Long Wharf in Boston, and offered spectacular views of Boston Harbor and the downtown skyline. It is a tragedy the complex was destroyed, as the property has remained undeveloped since that time. An AP Wire story described the blaze: 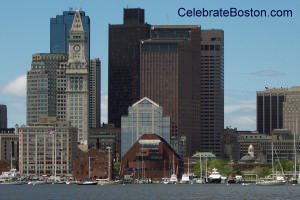 Today's View From Nearby

"Ken Harrelson's Boston 1800 Club, a waterfront restaurant and nightclub in East Boston, erupted in flames shortly before 1 a.m. today and was destroyed in a four-alarm fire.

The restaurant had been closed for two days because of a small cloakroom fire early Tuesday morning, and first reports indicated no one was injured in the blaze.

The building appeared a solid mass of flames for nearly a half-hour and illuminated the East Boston skyline and much of Boston Harbor as it raged out of control."

The shell of the 1800 Club stood for several years after the fire. The old concrete boardwalk, although partially collapsed, became a popular fishing spot. In 1972-73, Boston Harbor was fairly clean, and one could actually look down off the pier and watch schools of mackerel swim by as they were being chased by bluefish. If one got bored fishing, you could explore the old nightclub. The walls and interior partitions were still standing, with no roof above. The rooms were cleaned out, but glass fragments from broken beer mugs and martini glasses still littered the floors. The experience was a bit eerie, as the complex wasn't that old, but appeared ancient as a ruin.

Another strange fact is that within view of the wharf was a storage area used by MassPort. After the Delta Crash at Logan Airport in 1973, part of the tail of the aircraft was stored there for several years. One could stand in the ruin of the 1800 Club, and look over at the wreckage of a plane in which 89 people lost their lives. It was very sad.

About Ken Harrelson, he played for the Red Sox from 1967 to 1969, and had replaced Tony Conigliaro after his injury. The "Hawk" had his best season in 1968, and made the all-star team that year. Harrelson later became a broadcaster for Channel 38 in 1975, and was beloved by Red Sox fans in that position until he moved on in 1981.

The 1800 Club complex had reportedly cost $2 million to develop, with Celebrity Hosts, Inc. contracted to operate the restaurant. The Flying Cloud replica cost about $500,000, and may have been scrapped after the fire.