On November 28th 1942, a huge fire occurred at the Cocoanut Grove Night Club in Boston. 492 people perished in total. The Cocoanut Grove was originally a speakeasy—an illegal bar during alcohol Prohibition—and some of its doors were bricked up or bolted shut. The main entrance to the club was only a revolving door. There were flammable decorations throughout the building including cloth drapery and paper palm trees. The club had a licensed capacity of 500 people, and on the night of the fire there were about 1000 people in the building. All of the above contributed to the tragedy.

It was believed that a busboy lighting a match to see while replacing a light bulb had started the blaze in the basement Melody Lounge. [Official determination of cause.] Within 5 minutes the basement was totally engulfed and many people died stacked up at the one stairwell. The exit door at the top of the stairs was bolted shut. The fire spread to the ceiling on the first floor, and totally engulfed it within another 5 minutes. Many people died trying to exit through the revolving door—pushing from both sides and preventing escape. Some diners in the restaurant never even had a chance to leave their seats, having been asphyxiated by smoke and toxic gases.

As a result of the Cocoanut Grove fire and tragedy, the fire ordinances were expanded to include larger restaurants and bars, and not just theaters. Building codes were also changed so that outward swinging exit doors with pushdown "panic bars" must flank any revolving doors in larger facilities. The owner of the club was eventually convicted of involuntary manslaughter and spent 3-1/2 years in prison.

During the 1990s, former Boston Fire Fighter and researcher Charles Kenney had discovered and concluded that the presence of a highly flammable gas propellant in the refrigeration systems—methyl chloride—greatly contributed to the flashover and quick spread of the fire (there was a shortage of freon in 1942 due to the war effort). The busboy initially blamed for the tragedy was ostracized for much of his life because of the fire.

Arlington Street Station (Green Line) is nearest to the location of the Cocoanut Grove Fire. This photograph was taken at Piedmont and Church Streets, one block from Arlington Street. The Cocoanut Grove Night Club stood on the left. Embedded in the brick sidewalk, near the end of the parking lot above, is a memorial plaque that marks the spot of the building. This author searched Piedmont Street, unable to find the memorial, and a local resident directed me to the site, thankfully. It is sad a more significant memorial has never been erected. 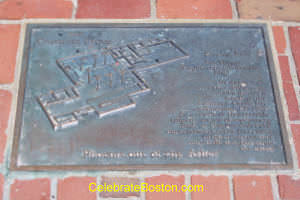 Embedded in the sidewalk is a memorial to those who lost their lives. The plaque states: "The Cocoanut Grove. Erected by the Bay Village Association, 1993. In memory of the more than 490 people that died in the Cocoanut Grove Fire on November 28 1942. As a result of that terrible tragedy, major changes were made in the fire codes, and improvements in the treatment of burn victims, not only in Boston but across the nation. 'Phoenix out of the Ashes.'"

The most famous person that died as a result of the fire was cowboy film star Charles "Buck" Jones. He was in Boston for a children's show at Boston Garden, and was traveling the country to sell war bonds and for publicity. Local theater owners arranged a tribute for him at the Cocoanut Grove on November 28th. Buck Jones died on November 30th from 3rd degree burns and other injuries. About 20 of 24 people in his party also lost their lives. The above image is from an old penny arcade card.

If one reads the newspaper articles about the tragic fire, witnesses describe a brilliant flashover in the ceiling of the club. A flashover occurs when built-up gasses spontaneously combust after a certain temperature is reached. A layperson could deduce that a highly flammable gas was likely present. It took 50 years for this to be publicized. Is it unreasonable to ask why?