From October 4 through 7, 1962, about seven inches of rain fell in greater Boston. The important Green Line Kenmore Station, with multiple streetcar branch lines, was inundated with flood water. Passengers had to be rescued with rowboats from stranded streetcars in the branch tunnels west of the station. The following is a description of the event from the Metropolitan Transit Authority (MTA) Annual Report of 1962 [predecessor of the MBTA]:

"On October 4, the barest trace of a storm began to show itself and on the following day, Friday, October 5, a sizeable 1.93 inches of rain was dumped on Boston. This was only the beginning.

Because on Saturday, October 6, an inundating 3 inches of rainfall swept over Greater Boston and although the bulk of the Authority's equipment remained on the move, operation into and out of Kenmore Square, a vital location in the system, was knocked out with deadly effectiveness. 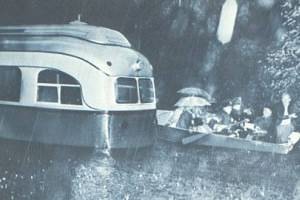 Simultaneously, four major surface routes feeding through this pivotal location went out of business. Nothing moved on the Highland Branch Line [Riverside D line today]; the Brighton-Newton-Watertown streetcar route [the old A line that was replaced by busses in the 1960s]; the Commonwealth Avenue line [Boston College B line] and the Beacon Street operation [Cleveland Circle C line].

Meanwhile, in the Kenmore Square subway, through which all these surface lines operate, flooding conditions worsened by the hour. On stretches of the Highland Branch, the water level rose to engulf the trucks of the vehicles.

It was this very condition that brought local fire-fighters and police representatives to the scene and using rowboats, they helped rescue scores of passengers marooned on the vehicles.

The engineering headaches presented by the developing storm began to take on monumental proportions as electrical equipment failed; rolling stock became idled and awash; signal systems gave out and the rising flood waters in the underground licked at concrete bulkheads. The scene was a transportation man's nightmare.

This already impossible situation was further aggravated when culverts carrying drainage from nearby Muddy and Charles Rivers became clogged with debris and backed up onto and over the MTA's property.

For some time, it appeared the emergency workers were fighting a losing battle because the heavy rain continued through Saturday October 6, and Sunday offered no respite because on that day, October 7, an additional 2.08 inches of rainfall was deposited on the area.

Within the underground at Kenmore Square, emergency MTA crews and others took to rowboats themselves in order move through the stricken sub-surface. The water level here was so high it completely inundated commuter benches [about 7 feet deep in some sections].

Workers fought against the rising waters by sandbagging the inclines, down which the flood waters swept over tracks and into the Kenmore Square underground.

Portable pumps were placed in operation in Kenmore station and all four subway pump locations at the Highland Branch, Beacon Street, and Commonwealth Avenue portals.

Pumping equipment was borrowed from the Boston Fire Department, the U.S. Navy and the U.S. Coast Guard as the task of restoring facilities continued." ...

Bus service was immediately instituted, bypassing Kenmore Station. Normal service was restored on October 11. "Tons of water and approximately 345 thousand dollars and lost revenue went down the drain," due to Mother Nature.