On April 5, 1815, a massive volcanic explosion occurred, causing global climate changes for more than a year after the event. Mount Tambora, located on the island of Sumbawa in southern Indonesia, violently erupted, and instantly killed about 15,000 people. Another 65,000 people died soon after of disease or starvation. Many tons of ash and debris were thrown up into the stratosphere, which blocked sunlight and slowly lowered the temperature globally. 1816 became known as The Year Without a Summer in the Northeast.

On June 6 and 7, 1816, a significant snowstorm hit northern New York and New England, with several localities recording 6 inches of snow. It is believed that on June 7 snow flurries occurred in greater Boston, which is likely the latest seasonal instance of snowfall in Boston history. In July and August, the unprecedented cold weather pattern continued, with temperatures dropping to 40 degrees Fahrenheit on certain days as far south as Connecticut. The average temperature reduction for the entire summer was about 3-5 degrees. 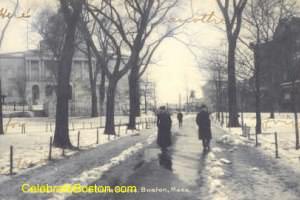 Year Without A Summer

The impact of the Mount Tambora explosion was far reaching. In New England alone, the event caused a large drop in crop yields for 1816, and has been attributed as a cause for the historic migration of many farmers from the Northeast to the Midwest in the 1820s.

An excellent contemporary account of the Spring of 1816 is recorded in the July 17, 1816 issue of The Reporter (Brattleborough, VT):

"The Season — It is believed that the memory of no man living can furnish a parallel to this present season. From every part of the United States, north of the Potomac, as well as from Canada, we have accounts of the remarkable coldness of the weather, and of vegetation retarded or destroyed by untimely frosts. In Montreal, on the 6th, 8th, and 9th of June were falls of snow, and from the 6th to the 10th, it froze every night. Birds, which were never before found except in remote forests, were then to be met with in every part of the city, and among the [flocks], and many of them benumbed with cold, dropped dead in the streets.

In the northern parts of the state [VT], about the same time, snow fell in considerable quantities. In the town of Cabot it was 18 inches deep on the 8th of June. From the northern and western parts of New York, and from Maine, we have received accounts of summer snows, and winter lingering in the lap of June; and the most gloomy apprehensions of distressing scarcity are entertained by those who witnessed the phenomena.

When remarkable effects appear to be produced, we have always philosophers ready to assign their causes. Ingenious theories on the subject of this apparent alteration of the climate of North America, have made their exits through the medium of newspapers. Some have attributed the diminution of atmospheric heat to immense fields of ice floating in the Atlantic to the eastward Gulph of St. Lawrence (which were met with by British merchantmen in the beginning of May,) together with unusual quantities of ice frozen in the lakes of the north-west of the United States.

The solution of these great bodies of ice, they tell us, must absorb great quantities of caloric from the atmosphere [heat], and thus lower its temperature. But it has not been made to appear, that the coasts nearest these masses of ice floating in the Atlantic, have been more distinguished by unseasonable frosts and snows than lands lying on the same parallel in the interior part of the country. We have heard of no deeper snows in June in the eastern part of New-Hampshire and the Province of Maine, than have fallen in Vermont, more than 100 miles from the sea coast.

The spring and summer frosts at Troy [NY], and its vicinity, have, we believe, been more severe than in the same latitude on the Connecticut river. Perhaps, however, it will be said that, thought the latter tract of country might feel the effects of the Atlantic ice, the former might suffer under the influence of the ice in the northern and western lakes, — But, allowing that great quantities of ice have, as it were, annihilated the spring, and blighted the summer, what philosophical conclusion can be drawn from the premises? Nothing more than this: Very cold weather produced great quantities of ice, and great quantities of ice, at their dissolution, were the cause of uncommon cold weather.

The question is, what was the cause of the original diminution of caloric, which for two seasons past [Tambora experts take note] seems to have lowered the temperature of the atmosphere throughout the northern part of our hemisphere? Perhaps we can assign no other cause than the fiat of the GREAT FIRST CAUSE [Adam & Eve]; — and the wisest philosophers will be ready to exclaim with Elihu, the friend of Jub, 'By the breath of God frost is given, and the breadth of the waters is restrained.'

We cannot, however, well forbear remarking, that the experience of several seasons passed has not comported with the theory of those philosophers, who have supposed that the mean heat of our climate has not increased by clearing and cultivating the country. This hypothesis has been opposed with great ability, and much depth of research, by Noah Webster, esq. in an essay which, if we recollect rightly, that gentleman, some time since, exhibited before a philosophical society in New Haven; a tract from which we have derived much pleasure and information, but have not now on hand. Indeed we can hardly believe that by denuding the country of its forests, and giving a free course to the cold and barren winds, which probably originate among enormous ice mountains to the north and west of the river St. Lawrence, the climate of New-England can be greatly ameliorated.

Spots on the Sun have likewise been supposed to have an influence on the present season. The sun is in no doubt the great fountain of caloric, or heat, as well as of light, and it is very rational to suppose that the objects which exhibit to us the appearance of spots on the sun, by intercepting calorific rays, may have deprived the earth of some part of quantity it usually receives. Spots on the sun so large as to be visible with the naked eye, are not of rare occurrence, and we believe something of the kind may always be seen by a telescope. Galileo, by the aid of a telescope, first discovered that the sun, which before his time had generally been considered as a globe of pure fire, was sullied by a number of dark spots, which appeared on various parts of its surface.

Neither our leisure nor our limits will admit farther discussion of this subject at this time. We may perhaps resume it on some furthre occasion, and give our readers all that 'our philosophy e'er dreamt on'."