Boston, Massachusetts, U.S.A. received its name from Boston, Lincolnshire, England. Many towns in New England were retained from those of the Mother Country. Boston U.K. was originally known as Botolph's Town, with its ancient church and beautiful steeple being its most distinctive feature.

The following is a description of Boston, England, from The Traveller's Guide in 1805 (edited): Boston, Lincolnshire, market town, distance from London, 112 miles. The name is an abbreviation of Botolph’s Town, from Botolph, a Saxon, who had a monastery here, and is supposed to have been its founder. It is seated on both sides of the river Witham, and, being not far from its influx into the sea, enjoys a good trade; its harbor can admit vessels of an inferior burthen only. It has a navigation from Lincoln partly by the Witham, and partly by a canal. It had formerly, besides St Botolph's monastery, a priory, 4 friaries, and 3 colleges, whose lands Henry VIII, gave to the town. 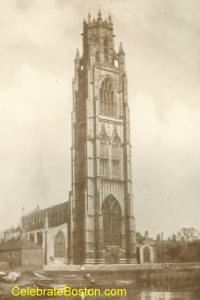 The town was supplied with fresh water by pipes, from a pond in the great common, called the West-fen, where a water house and mill were erected in the reign of Queen Anne, by act of parliament; but, the water being far from excellent, they were neglected, and the inhabitants have since had recourse to pumps and cisterns. All the neighboring country is marshlands, which are very rich, and feed vast numbers of large sheep and oxen. The fens are very considerable for their extent; for they reach in length, in some places, 50 miles, and in breadth above 30; and, as they are so level that there is no interruption to the sight, any building of extraordinary height can be seen a long way.

Several Roman antiquities have been dug up here. It likewise had two churches; St. John's and St. Botolph’s: the former had long since gone to decay, and the last remains of it are not now visible; but the churchyard is yet used as a burying ground. St. Botolph's church is a handsome structure, of Gothic architecture, and is reckoned the largest parochial church, without cross aisles, in the universe, being 300 feet long within the walls, and 100 feet wide. It's ceiling is made of English oak, supported by tall slender pillars. It has 365 steps, 52 windows, and 12 pillars, answerable to the days, weeks, and months of the year. Its tower, the highest in Britain, which was built beginning in 1309, is 282 feet high. It has a beautiful octagon lantern on the top, which is a guide to mariners, as they enter the dangerous channel of Lynn-deeps and Boston-deeps, as well as the wonder of travelers, who can see it 40 miles in all direction. The architecture of the whole is light, yet magnificent. It has a very good organ, and there are 8 uncommonly tunable bells, chimes, and a large clock, with fissures that strike the quarters. Here is a neat little theater, with, generally, a good company of actors.

This town has been very much improved by taking down many old buildings and erecting new ones. The market building is spacious, and is ornamented by a handsome market-cross, in which is a good chamber was constructed, appropriated to the purposes of corporation meetings, card assemblies, etc. About the latter end of the reign of Henry I this town was set on fire by a gang of desperados, who came to its fair in the disguise of monks and priests; but the town soon recovered, and became a staple of wool, by which it was much enriched, and the merchants of the Hans-towns [neighboring pasture and estate] came and fixed their guild here. But, when the wool was prohibited, the trade and town gradually declined. Having, however, derived fresh consequences from its late enclosures, it is now a considerable thriving place.

In 1772 the corporation built a very excellent fish market, and the town is well supplied with both sea and river fish. Market days, Wednesday and Saturday; fairs, May 4, August 11, November 22, and December 11. The post sets off to London every morning at 10 o’clock, and returns every afternoon at 2. And on Sundays, Tuesdays, Wednesdays, and Fridays, it is forwarded down to Bolingbroke, Horncastle, Spilsby, Alford, and Louth, and returns to Boston in time for the London mail. Between it and Benington, on the right, at Friestone, is the seat of John Linton, esq. Principle inns are Peacock, Red Lion, and White Hart.