Do restless souls still wander upon Boston Neck? Was the tragic hanging of Quakers avenged by a later curse?

Boston proper was originally a peninsula, created by the combined delta of the Charles, Mystic, and Chelsea Rivers. This peninsula was connected to the mainland by a narrow strip of land that was known as Boston Neck.

Boston Neck was fortified with a gate and guard house. Entry into the town by land was limited to this narrow spit of land. Just south of this fortification was Gallows Hill. Quakers, criminals, and non-conformists were executed there.

Puritan Boston was governed by a theocracy. Strict Biblical principles were enforced. In general, if you dissented from the majority, you were banished from the colony. If you returned, you could be hanged by the neck until dead.

The gruesome procedure was for the offender to be taken on a cart, or dragged by one, and brought to the Neck, bound, made to climb a ladder which rested against a tree, and then the ladder was tipped over. A parade-like atmosphere existed during such processions to the Neck.

After a prisoner was hanged for crimes against the State, their body was dumped in a field that was adjacent to Gallow's Hill. The corpse was either buried by a merciful spectator, or left there for animals to eat. This field was located on the east side of Washington Street, between today's East Berkeley and West Dedham Streets.

The photo above is of Washington Street looking north from East Brookline Street in the South End. Gallow's Hill was north and to the right of the cathedral. The image below shows the Neck in 1775, with the lower rampart of the fortification built on the hill (just south of today's East Berkeley Street).

In 1659, three Quakers were banished from the town. Marmaduke Stevenson, William Robinson, and Mary Dyer were told to never return, upon penalty of death. The three Quakers were compelled by their religion to immediately return to Boston and test this "bloody law." The following is a 1667 account of the consequences:

"And when W. Robinson went cheerfully up the ladder to the topmost round above the gallows and spoke to the people that they suffered not as evildoers, but as those who testified and manifested the truth and desired them to mind the light that was in them, the light of Christ of which he testified, and was now going to seal it with his blood, the old priest in much wickedness said: 'Hold thy toungue; be  silent; thou art going to die with a lie in thy mouth.'

So being come to the place of execution, hand in hand, as to a wedding day, all three with great cheerfulness of heart, and having taken leave of each other, your executioner put William Robinson to death and after him M. Stevenson."

Mary Dyer was bound and had climbed the gallows ladder prepared to die,  but was reprieved at the last moment. Mrs. Dyer was again banished from Boston but returned in 1660. She was executed soon after.

In 1674, Increase Mather wrote that someone had erected a pillar over the graves of the Quakers with an inscription "Here lies the bodies of such & such, their souls triumphing, their bodies crying out for vengeance. This is an ill-omen."

In 1699, a Quaker named Thomas Story was riding from Braintree to Boston and wrote: "We went to Boston, near which on a green we observed a pair of gallows, and being told it was a place where several of our Friends had suffered death and been thrown into a hole, we rode a little out of the way to see it, which was kind of a pit, near the gallows, and full of water."

The gallows was later moved south, closer to the site of the cathedral in the above photo. The last gallows on Boston Neck was located near South Burying Ground, about two blocks further south of the cathedral. Executions were later carried out in the yard of the new Charles Street Jail, starting in 1826.

If the reader believes in spirits or paranormal activity, the Neck is a location in Boston where restless souls may still wander. Possibly to avenge their "crime" of faith?

[Author's note: The area just south of Boston Neck was known as "the Common Lands."  Most executions took place there, not at Boston Common, which is more often mistakenly published.] 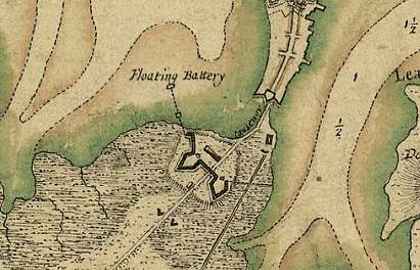