"On March 5, 1770, in front of the Old State House, five men were shot and killed out of a mob that attacked a group of British Soldiers. In the excited state of the public mind at that time, a chance encounter between a sentry and some youths quickly developed into an attack with stones, clubs, and snowballs, which led to retaliation by the soldiers. The result was the death of five individuals.

It is said the British sentry that was initially attacked was stationed in front of the custom house, and he had to load his gun and retreat up the custom house steps and shout for help. A corporal and six privates of the main guard stationed near the head of State Street, were ordered to his relief, and fired upon the crowd only when they themselves were pressed and attacked by it. 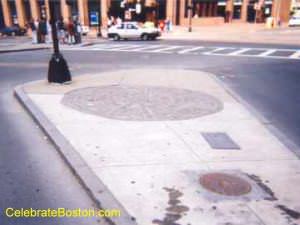 The massacre threw the town into great excitement. Immediately after the incident, bells were rung, and drums beat to arms; and a further more serious event was feared. But the troops were ordered to their barracks, and quiet was in great part restored. The next day came the great town meetings at Faneuil Hall and then the Old South Meeting House, with the demand by Samuel Adams and a committee of 15 citizens, that the troops be removed. Governor Hutchinson eventually complied with the request. The five victims of the Boston Massacre, Crispus Attucks, Samuel Gray, James Caldwell, Samuel Maverick and Patrick Carr, were buried with great solemnity at Granary Burying Ground, after a parade from the Old State House (refer also to the Christopher Snider page). 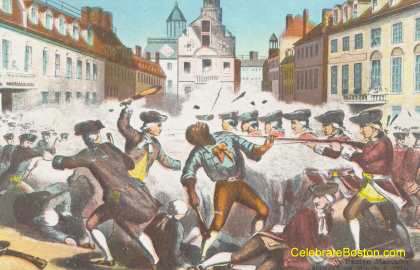