Site Of The First Public School

Embedded in the sidewalk on School Street is a mosaic commemorating the site of the first public school in English America. The history of the Boston Public School System begins in the earliest days of the colony. The colonists quickly established the church, and then the school. In 1635, the first school opened, with Philemon Purmont appointed school-master. This was the famous Boston Latin School, which has flourished from that time to now. The first school building was located on School Street, just to the right of today's mosaic and where the Benjamin Franklin Statue now stands. The second school building was on the opposite side of the street, where part of the Parker House is now located. 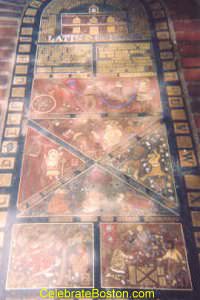 It is believed that establishment of the first school was largely due to the work by John Cotton. Cotton was born in Derby [pronounced "Darby"] England, in 1585. He brought a knowledge of the Free Grammar School founded there by Queen Mary, in which Latin and Greek were taught. Two years after he arrived in colonial Boston in 1633, the new school was established. Also after his arrival, the Thursday Lecture Series [religious teachings] was started, and the weekly market day, both of which were customs of the older town in the mother country. 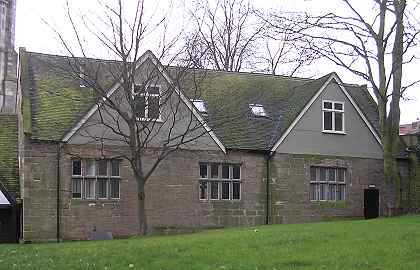