At Washington and School Streets stands the Old Corner Bookstore Building. It is one of the oldest structures in Boston, having been erected in 1712 by Thomas Crease. He used the building as his home, and opened a small apothecary shop on the Washington Street side.

The original building that stood at this location was quite historic. Mrs. Ann Hutchinson lived here, where she held her famous séances in 1635. [Religious meetings in which some individuals discussed their personal revelations from God.] Her belief was that each person was responsible for their own actions, and this doctrine was opposite the majority view that the Puritan Ministers were the sole administrators of God's will. Hutchinson was banished from the colony by the General Court in 1637. She moved to Rhode Island, and then New York. She was killed in 1643 during a Native American uprising against the Dutch. 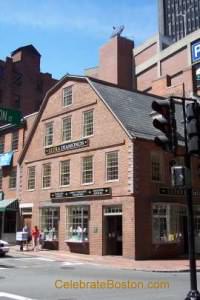 The Old Corner Bookstore Building (1712) was for many years known as Crease House, and then the Brimmer Mansion. In 1816, Dr. Samuel Clarke lived here and opened an apothecary's shop on the first floor, restoring the storefront to its original purpose. In 1828, Clarke was succeeded by Carter & Hendee, who first used the shop as a bookstore. The building then exercised an influence on the nation's literary life, most notably from 1833 to 1864, when it was occupied by Ticknor & Fields.

Ticknor & Fields was a leading publisher, and the building was an informal meeting place for many famous authors if the day. Through its doors Henry Wadsworth Longfellow, Nathaniel Hawthorne, Oliver Wendell Holmes, Ralph Waldo Emerson, Henry David Thoreau, Harriet Beecher Stowe, and Charles Dickens, have passed.

The building had fallen into disrepair by the 1950s, and was restored in 1960. Today, a shop is vacant, and was formerly occupied by a jewelry store.