"The Samuel Adams statue stands behind Faneuil Hall on Congress Street, and is the work of Miss Anne Whitney. It represents the Revolutionary patriot, clad in the citizen's dress of his period, standing erect, with folded arms, and with a determined look in his finely chiseled face. He is portrayed as he is supposed to have appeared just after demanding that Governor Hutchinson immediately remove the British troops from Boston after the Boston Massacre, and while awaiting the Englishman's answer. The troops were removed to Castle Island, and this event can be considered the first British concession before the American Revolution. 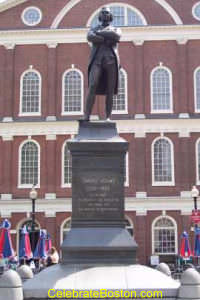 The inscriptions on each of the four panels of the pedestal are as follows: 'Samuel Adams 1722-1803 - A Patriot - He organized the Revolution, and signed the Declaration of Independence. Governor - A True Leader of the People. Erected A. D. 1880, from a fund bequeathed to the city of Boston by Jonathan Phillips. A statesman, incorruptible and fearless.'

The statue originally stood in Adams Square, which was demolished to build Government Center. It now stands behind Faneuil Hall facing Congress Street and Boston City Hall. Many nearby attractions include the Old State House, Faneuil Hall Marketplace, Mayor Curley Park, and the Holocaust Memorial.