Walkway of the Running Stars

During the 1970s, there was great interest in the sport of running. It was part of a healthier living trend, and there was much optimism that long standing track and field records could be broken. 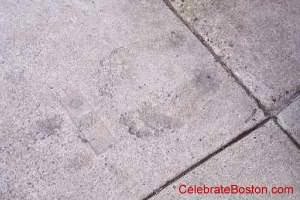 Part of Boston's sports folklore was lost on September 30th 1996 when the Eliot Lounge closed its doors forever, only three years after the new sidewalk was set. The Eliot Hotel underwent a $10 million renovation and a restaurant eventually replaced the lounge.

The Eliot Hotel is located in the Back Bay District at Massachusetts and Commonwealth Avenues. On the Mass Ave side of the building, to the right of the restaurant entrance, is all that remains of the Walkway of the Running Stars. The 1993 footprints are still partially visible in the sidewalk.