The most prominent of the Founding Fathers was John Winthrop (1587-1649). He is buried at Kings Chapel Burying Ground. Winthrop was the first Governor of the Massachusetts Colony; from 1630 to 1634. He was one of the best educated of the Puritan company. Winthrop had great wisdom, piety, and strict integrity. He was very religious, and was conscientious in all his conduct, both in public and private life. Prudence, firmness, probity, and good judgment were leading traits in his character.

In the early days of the colony, the people generally had perfect confidence in the soundness of his purpose, and the wisdom in his administration. Sir Henry Vane was his rival for a short time, but the merits of Winthrop were appreciated by the more intelligent, and Vane soon left the colony and returned to England. A few others complained about some of his conduct, but public inquiry proved him strictly honest and impartial, and silenced this opposition. 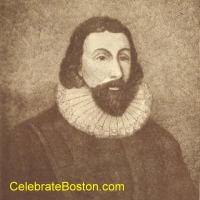 Governor John Winthrop dealt harshly with religious dissenters such as Roger Williams, the Antinomians, and the few Episcopalians in the colony. He considered the opinions of Williams as opposing the stability of the government. Roger Williams had condemned the oath of allegiance, and the right of the Crown to rule the territory. Williams insisted on separating from those who would not denounce the Church of England, and set his own will in direct opposition to some of the orders of the government. Williams was an honest man, but opinionated, eccentric, and obstinate; his views, in many respects, threatened the overthrow of the infant colony. Roger Williams was banished from Massachusetts in 1635.

Religious dissenters were dangerous to the peace of the colony. Their removal was essential for securing the great end of the Puritan company—to settle in a new and distant region. Persecution for religious faith is not justified, but some apology may be made for men who had been led to suffer and sacrifice so much, under the authority of the prelates and officers of the Church of England, for their desire to maintain purity of worship, and to keep out all forms they deemed erroneous and unscriptural. But John Winthrop was not a persecutor; he was far less intolerant than later Governors Dudley or Endicott, or even Bellingham. And in the latter part of his life, he lamented that he had ever adopted any measures of severity towards those of different religious views from himself.

John Winthrop died in 1649. He was placed in the Winthrop family tomb at King's Chapel Burying Ground. He left several sons who were men of great distinction and self worth, both in Massachusetts and in Connecticut. Winthrop always exercised the full political power granted in the charter to govern Massachusetts, and opposed any appeals to Parliament or the Crown, as an infringement on the rights of the people here, and considered such appeals as extremely dangerous to civil liberties.