Each summer, free concerts take place in the Seaport District. The Friends Of Fort Point Channel neighborhood association periodically sponsor a concert series in the Seaport District. In 2016, the 7th annual HarborWalk Sounds series will take place at the Institute of Contemporary Art. The unique cantilevered design of the ICA building allows for an outdoor stage on the waterfront side of the building. Local performing artists are presented, featuring a wide variety of music styles and genres. ICA is located on Northern Avenue in the Seaport District, and is part of the Harborwalk, a pedestrian path that connects Boston’s historic waterfront from north to south. Music styles can vary from reggae to classical to rock and roll, as popular local bands please audiences at this unique venue. 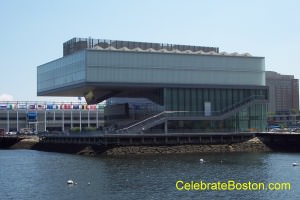 In the early 1900s, this portion of the Seaport District was known as the Wool District. Boston was at one time one of the world’s largest marketplaces and gateways for woolen and textile goods. By the 1940s, the industry had migrated to southern states in search of lower costs, and many of the old brick warehouses in the district became vacant. By the late 1970s, local contemporary artists began to lease and subdivide the cavernous empty warehouse spaces, which marked the beginning of urban renewal in what today is known as the Seaport District.

Fort Point Channel is named after Fort Hill. Part of the hill jutted out into the sea from the peninsula of Boston, hence Fort "Point." The hill was an excellent location for defending the town, and cannon were mounted atop it in the 1600s. Fort Hill was cut down in the mid-1800s and used for landfill, with its former apex being located at the intersection of today's Oliver and High Streets.

Fort Point Channel was a canal that connected Boston Inner Harbor to a small bay called South Cove (and other previous names). South Cove was also eventually filled-in, and became part of South Boston and Dorchester.

Stop by and enjoy a free concert at the ICA. Nearby attractions include the Children's Museum, Rowe’s Wharf, Fan Pier, Boston Design Center, and Boston Convention Center. Also, less than a mile away along the Harborwalk are the New England Aquarium, Christopher Columbus Park, and Faneuil Hall Marketplace attractions.

Thursday July 28, 6:00 pm - 8:30 pm
Selah Poitier
"Bahamian bassist and singer Selah Poitier combines deep expressive vocals with an eclectic range of genres from modern jazz and neo soul, to hip-hop and R&B, to blues and funk, with some gospel, Afropop and reggae for good measure."

Thursday August 11, 6:00 pm - 8:30 pm
ChoroBop & +55 Group
"[A mingling of] instrumental Brazilian pop with bebop, contemporary music, and jazz... Amplifying their sound will be vocalists from the +55 Group, whose mission is to promote Brazilian music."

Thursday August 25, 6:00 pm - 8:30 pm
NikKollective
"[Nikkollective is] an immensely talented and assorted group of musicians from around the world [that produces] a bombastic and rhapsodic sound."