In the 1930s and 1940s, folklore abounded that the windy streets of Boston were originally determined by cows wandering aimlessly about the town. The old postcard below muses, "In Boston town, of old renown, the gentle cows the pathways made, which grew the streets that keep the stranger quite dismayed."

Analyzing this assertion, it is most likely that topography and a lack of urban planning were the main reasons why Boston's streets were laid out so randomly. Boston was a small village, originally modeled after hamlets in Lincolnshire, England. The town was borne on a peninsula located in the combined delta of the Charles, Mystic, and Chelsea Rivers. Boston Proper had several hills, with Beacon, Copp's and Fort Hills being the most prominent.

Looking at the original peninsula, one can infer the streets were laid out for the following reasons: 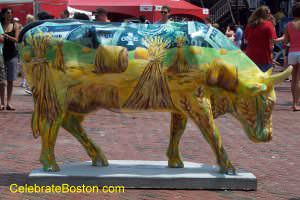 Forests. Boston was a wilderness. The peninsula undoubtedly had deer paths and Native American trails all over it. Deer paths general traverse hills from bedding areas to feeding and watering places (Spring Lane was likely a popular watering hole).

Topography. The town was very hilly, with many run-off brooks that were dry in summer. It is likely that some of the original streets from Tremont Street to the waterfront followed such brooks. Hanover, State, and Summer Streets are likely examples.

Natural Obstacles. Some areas of the ancient town could only be accessed via hasty dirt abutments built across marshes. Streets were laid out to avoid such bogs and obstacles. An example is Post Office Square, which was probably a low-lying area 300 years ago.

Native American, Pirate, or French Attacks. Pockets of narrow streets were much easier to defend than broad avenues. Many of the original wooden buildings had an overhanging 2nd story, which allowed the street-level windows to be boarded up very quickly.

Commerce. Boston was a bustling seaport for more than 200 years. Tidal flats were hastily filled-in to meet the needs of the shipping industry. The Beach Street are to the south once contained wharves (the Boston Tea Party took place at Griffin's Wharf, off Atlantic Avenue at Pearl Street). Street patterns were often "unscientific" when areas were filled-in. Mill Cove near North Station was filled-in to support the shipping industry, with warehouses constructed along Portland, Friend, and Canal Streets. Mayor Josiah Quincy had originally reclaimed the land at the foot of Long Wharf to build Quincy Market. Several other land additions in that area led to buildings such as Mercantile Wharf being constructed, which is today land-locked at a strange angle relative to the new Greenway.

Land Speculation. By the early 1800s, the Merchant Princes of Boston deliberately took down Beacon Hill and developed the Back Bay District. Beautiful and expensive brownstone residences were built there, in a pre-planned grid of streets.

Thus, one can deduce that cows did not lay out the streets in ancient Boston, although they like roamed freely in the early days to pasture on Boston Common. The only hint of truth in such folklore is that High Street was once known as Cow Lane.

But when you are stuck in traffic in downtown Boston, or cannot get to your destination due to a one-way street, that may be a good time to blame those cows for the narrow and windy streets! 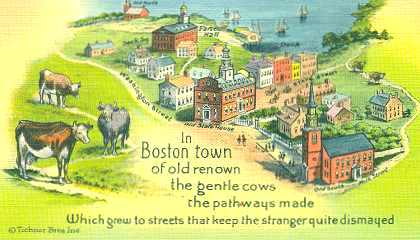