"The [Civil War] Soldiers and Sailors Monument is on the hill in Boston Common near the Frog Pond. It was designed by Martin Milmore, and dedicated on September 17th, 1877, when the entire militia force of the State paraded in Boston, and was reviewed by the President of the United States.

The platform is thirty-eight feet square, and rests on a mass of subterranean masonry sixteen feet deep. Four projecting pedestals sustain four bronze statues [presumably stolen], each eight feet high, representing Peace, a female figure bearing an olive-branch and looking to the South; the Sailor, a picturesque mariner carrying a drawn cutlass, and looking seaward; History, a graceful female figure, in Greek costume, holding a tablet and stylus, and looking upward; and the Soldier, perhaps the best statue on the monument, representing a Federal infantryman standing at ease, and bearing the face of a citizen-soldier rather than that of a professional warrior. 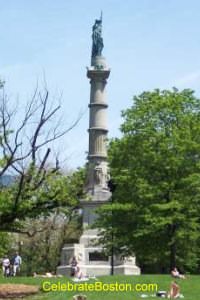 Between these pedestals are four large bronze reliefs. In the front is "The Departure for the War," with a regiment marching by the State House steps, the mounted officers, from left to right, being Colonels Lowell and Shaw, both of whom were killed, Colonel Cass, General Benjamin F. Butler, and Quartermaster General Reed. On the steps are the Revs. Turner Sargent, A. H. Vinton, Phillips Brooks, and Archbishop Williams; Governor Andrew, shorter than the others; Wendell Phillips, Mr. Whitmore, the poet Longfellow, and others.

The second bas-relief shows the work of the Sanitary Commission, the left-hand group being on duty in the field, with the Rev. E. E. Hale at its head; and in the other group the seven gentlemen are E. R. Mudge, A. H. Rice, James Russell Lowell, Rev. Dr. Gannett, George Ticknor, W. W. Clapp, and Marshall P. Wilder (from left to right).

"The Return from the War" is the most elaborate of the reliefs, and contains forty figures. The veterans are marching by the State House, and are surrendering their flags to Governor Andrew, while joyful wives and children break the ranks of the regiment. The mounted officers are Generals Bartlett, Underwood, Banks, and Devens (from left to right); the civilians are Dr. Reynolds, Governor Andrew, Senator Wilson, Governor Claflin, Mayor Shurtleff, Judge Putnam, Charles Sumner, C. W. Slack, James Redpath, and J. B. Smith.

The fourth relief represents the departure of the sailors from home (on the left), and an engagement between a Federal man-of-war and monitor and a massive Confederate fortress.

The main shaft of the monument, an ornate Roman-Doric column of white granite, rises from the pedestal between the statues; and at its base are four allegorical figures, in alto-relievo, and eight feet high, representing the North, South, East, and West. On top of the capital are four marble eagles.

The crowning glory of the monument is the statue of America, eleven feet high, symbolized by a majestic and mourning woman, clad in classic costume, and crowned with thirteen stars. In one hand she holds the American flag, in the other a drawn sword and wreaths of laurel; and she faces the south.

The bronzes were cast at Chicopee, Mass., and at Philadelphia; and the stone is white granite from Hallowell. The monument bears the following inscription, written by the President of Harvard College:

Next to the Soldiers & Sailors monument stands the World War I Sub-Chasers Memorial, which is an actual Mark IV ocean mine.