A memorial to World War I North Sea Mine Sweepers stands on the hill that overlooks the Frog Pond in Boston Common, near the Soldiers Monument.

U-Boats, or German Unterseeboots, were a deadly threat in the North Atlantic. Stealthy submarine attacks were terrifying to the merchant marines, and their capability generated little hope of survival if one's ship was torpedoed. The most famous U-Boat attack in American history during the war was the May 7, 1915 sinking of the R. M. S. Lusitania passenger ship, which killed 128 Americans. The U.S. was still officially a neutral country when Lusitania was torpedoed.

The United States entered World War I on April 6, 1917, just after President Wilson's famous Made Safe For Democracy speech to Congress. By that time, more effective counter-measures had been developed against the U-Boat menace, including the tactic of assembling merchant ships into conveys that were escorted by destroyers. 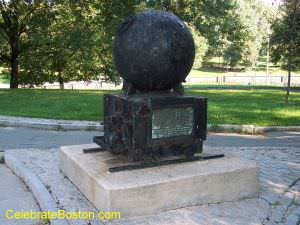 U. S. Mine Squadron One, or unofficially, The Yankee Mining Squadron, was then directed to mine the 250 mile wide entrance to the North Sea, from Scotland to Norway, which was a huge task. About 56,000 mines were quickly launched, with a record 600 mines deployed in 2 hours by a single vessel. About 22 German U-Boats were destroyed in total. This mining application was an effective barrier against the submarines, and greatly helped to render the U-Boat as a less productive weapon.

After the war, in 1921, to honor the sailors that mined the North Sea, a memorial was placed in Boston Common by the North Sea Mine Force Association. A bronze plaque was mounted to a Mark VI mine. A Mark VI mine has a ball on top that is placed on a rectangular box, as visible in the above photo. The plaque states the following:

"A type of the 56,571 Mines laid and swept in the mine barrier placed in the North Sea by the United States Navy during the World War 1917-1919. The greatest achievement of its nature recorded in all naval history and placed here as a tribute to those who sacrificed their lives and to the survivors of this feat. Presented to the City Of Boston through the North Sea Mine Force Association October 26, 1921"