The Marriott Custom House was Boston's first skyscraper. The building was initially completed in 1847, with the twenty-six floor tower added in 1913. The original design was that of a Greek temple, with Doric columns on all four sides, and a large domed roof. Before land reclamation was done in the mid-1800s, Boston's waterfront had extended right to this building.

The Custom House was completely renovated in the 1990s, and now is a timeshare owned by Marriott Vacations. The building has luxurious rooms, harbor and city views, a full-service concierge, and an open observation deck on the 25th floor.

The following is quoted from the 1850 Boston Almanac, with a historic description of the original Custom House building:

"Situated at the head of the dock between Long and Central Wharves, fronts east on the dock, west on India Street, and is in the form of a Greek Cross, [with] the opposite sides and ends being alike. It is 140 feet long north and south, 75 feet wide at the ends, and 95 feet through the centre.
....


It is built on about 3,000 piles, fully secured against decay; the construction throughout is fire proof and of the very best kind.

The exterior of the building is purely Grecian Doric, not a copy, but adapted to the exigencies and peculiarities of the structure, and consists of a portico [overhang] of 6 columns on each side, on a high flight of steps, and an order of engaged columns around the walls, 20 in number, on a high stybolate or basement; the order of engaged columns terminating with 4 andae [pilasters] at their intersection with the porticos. The columns are 5 feet 4 inches in diameter and 32 feet high, the shaft being in one place, each weighing about 42 tons.
....


The cellar, which is 10 feet 6 inches high to the crown of the arches, is principally used for the storage of goods, which are conveyed to it through the basement story. The steam apparatus for warming the whole building (which it does effectively) is situated in the cellar, having easy access to the coal vaults under the sidewalk outside of the building.

The principal entrances to the basement story are at each end. They are for the receipt of goods for storage. Near the northwest corner, on the west side, is the entrance to the Night Inspectors' apartments, also to the private staircase leading to the Collector's room and the attic. South of the west portico is the entrance to the heating apparatus room, and on the south end is the entrance to the Custom House Truckmen's room. This story consists of rooms for the Night Inspectors, Custom House Truckmen, and Engineer of the Heating Apparatus, also three sets of Water Closets: the remainder is used for storage of goods, weigher's tabs, etc.

The principal ingress to the entrance story is through the porticos, but it can be entered from the Collector's private staircase, and from two other private staircases in the basement. This story contains apartments and offices for the Assistant Treasurer, the Weighers and Guagers, the Measurers, Inspectors, Markers, Superintendent of Building, etc. In the centre is a large vestibule, from which two broad flights of steps lead to the principal story, landing in two smaller vestibules therein, lighted by skylights in the roof, and these vestibules communicate with all the apartments in this story. The several rooms are for the Collector, Assistant Collector, Naval Officer, Surveyor, Public Store Keeper, their Deputies and Clerks; and for the facilities of doing business this arrangement is not surpassed. The grand-cross shaped Rotunda, for the general business of the Collector's department, in the centre of this story, is finished in the Grecian Corinthian order; it is 63 feet in its greatest length, 59 feed wide, and 62 feet in the skylight.
....


The building was commenced in 1837, and entirely completed in 1849; it has cost about $1,076,000, including the site, foundations, etc. It was designed by A.B. Young, A.M., Architect, and erected under his immediate supervision throughout. The execution of the whole was under the general direction of the Board of Commissioners, appointed by the Secretary of the Treasury of the United States. This Board consisted of Samuel S. Lewis, Esq., as chairman, Robert G. Shaw, Esq., disbursing agent and commissioner, and Collector of the Ports of Boston and Charlestown for the time being. Jonathan P. Robinson was Clerk to the Board of Commissioners. In one of the panels of the Rotunda is inserted a tablet of marble, containing the following inscription:

Nearby attractions to the Boston Custom House building include the New England Aquarium, Faneuil Hall, and Quincy Market.

Nearby attractions to the Boston Custom House building include the New England Aquarium, Quincy Market, and Faneuil Hall. 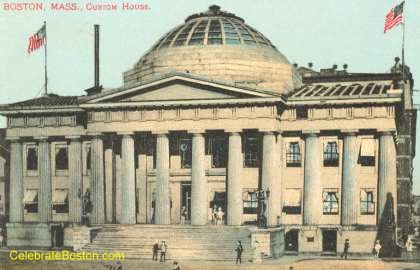