At 53 State Street is the facade of the old Boston Stock Exchange building. The original structure was built in 1891, and a large glass tower was added behind the old facade in 1984. Retaining the facade allowed State Street to appear the same as it has since 1891. This example of architectural preservation was extremely innovative, and arguably spawned a successful preservation movement in many other cities in the United States.

The following is quoted from How To See Boston by Moses King (1895) about the 1891 building: "The most notable modern feature of State St. is the twelve-story granite Stock Exchange (legally the State-Street Exchange Building), one of the largest office-buildings in America, with frontage of 170 feet on State Street, 160 feet on Kilby Street, and 53 feet on Exchange Place. This huge hive of banks, corporations, safe-deposit vaults, lawyers and business men, was built in 1889-1891, from designs by Peabody & Stearns, at a cost of $4,000,000. Alexander S. Porter, a prominent real-estate agent, conceived the plan, raised the money, and carried through the negotiations, which were strictly cash transactions, without mortgages. The magnificent Corinthian hall of the Stock Exchange (115 by 50 feet) affords very exciting scenes when the stock market is agitated. A gallery on the second floor is always open to visitors." 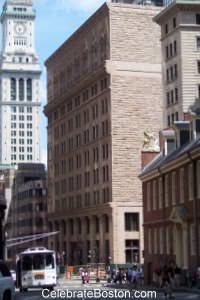 The original facade and adjacent tower are collectively known as Exchange Place. The developer had sought (and attempted) to tear down 53 State Street, and several injunctions were served to prevent the building from being destroyed. Marcia Myers, director of historic preservation within the City of Boston, was fundamental in saving the facade of this building, and in thankfully saving swaths of other buildings in downtown Boston and the South End.

One can argue that "Prosthetic Architecture," or preserving parts of historic old buildings was borne in Boston. Several other facades in the downtown were saved after Exchange Place was built. Ian Menzies, a Boston Globe writer looked back at the office tower construction movement in the 1980s and mused, "How viable is a venerable old Boston building that retains its face but loses its behind?" Boston has forever lost Scollay Square, old Atlantic Avenue, and the West End, so this author is glad that at minimum the facades of these historic buildings did survive.

53 State Street was also the site of the Bunch Of Grapes Tavern, founded in 1713, and a popular meeting place of Sons of Liberty before the Revolution, and also the first Masonic Lodge in the United States.

Nearby attractions include the Old State House, Faneuil Hall, and Quincy Market.