The Old Feather Store building was constructed in 1680, and was torn down in about 1860. The house stood at Dock Square and North Street (today known as One Faneuil Hall Square), on the north side of historic Faneuil Hall, at about where the building at 1 Union Street now stands.

The style of the building has been described as Northern European or Hanseatic (a confederation of northern German towns in the 1600s), with overhanging stories and gabled windows. When originally constructed in 1680, the waves of the ocean used to lap up almost to its doors, long before landfill projects reclaimed the tidal flats in the area. 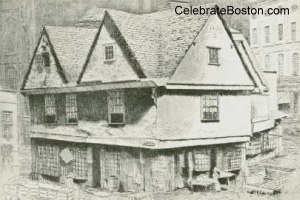 The building became known as the Old Feather Store because of the feathers and furniture that were sold in a 1st floor shop for many years. It was constructed of heavy oak timbers and was in excellent condition when torn down. Many considered the structure one of the most picturesque buildings in the country. The facade was covered with stucco filled with fragments of glass.

It is believed that overhanging stories on the ancient buildings of Boston had served two major purposes: To protect pedestrians from rain, and to allow faster boarding up of the houses if the town was attacked by Indians.

It's a tragedy that the building was torn down. Can you imagine the tourist attraction it would be today? Either a famous restaurant and bar would be occupying the building, or it would have been part of the National History Site with Faneuil Hall.