The Tobin Memorial Bridge is a cantilever truss bridge that spans the Mystic River from Charlestown to Chelsea, Massachusetts. It opened in 1950 after two years of construction. The bridge is more than 1,500 feet long, with a center span of about 800 feet in length.

U.S. Route 1 travels over the Tobin Bridge, and then connects in downtown Boston with Interstate 93 and the Big Dig tunnel system.

The bridge is painted rustic green, and of distinctive style of that period. For those unfamiliar with the bridge, there are two interesting features. During winter, high winds pass through the bridge by design, and one can feel the lift when approaching the high point just before the southbound-only toll plaza. The other interesting feature is also experienced when driving south. After leaving the toll plaza, one travels from more than 100 feet in height to below ground level into a tunnel in Charlestown. 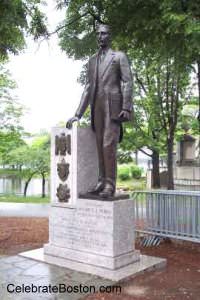 Tobin's legacy was his diligent support of labor laws, such as promoting fair employment practices, anti-discrimination practices, and support of workers compensation and unemployment benefit rules. Tobin had authorized construction of the Mystic River Bridge while serving as Massachusetts Governor, and supported legislation which created the Massachusetts Port Authority.

An amusing note about the MassPort takeover in 1959 of the Mystic Bridge, Logan Airport, Hanscom Field, and the Port of Boston, is State Treasurer Kennedy stating that the transaction was a "bigger steal than the Brinks robbery" due to its $44 million price tag.