Near the entrance to the Public Garden at Beacon and Charles Streets is the adorable Make Way for Ducklings statue. Anybody who visits the park, a popular destination for both adults and children, will no doubt notice the delightful statues of a Mother duck and her eight ducklings.

It was the popularity of the children's picture book by Robert McCloskey that led to the construction of the statue by renowned sculptor, Nancy Schon. McCloskey was an illustrator first, and author second, so retelling the Ducklings story tends to vary by individual based on their perception of the award-winning illustrations. 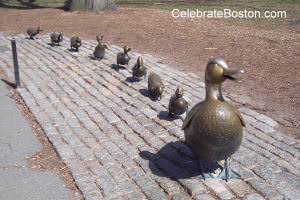 Each Mother's Day, a children's procession takes place in the Public Garden, which has become known as the Duckling Day Parade. The official name of the event is Ducklings Day. Young children dress up in duck-like outfits and trace the steps of the mallards within the Garden. A reservation is required, which allows access to the celebration. The event usually includes entertainment and a snack in addition to the procession. The registration fee is $35 per family through online advance registration.  Check-in begins at 10:00 am on Boston Common at the Parkman Bandstand.

Make Way For Ducklings was first published in 1941, and in 1942 it won the Caldecott Medal for its illustrations. More than two million copies of the book have been sold.

This enchanting story tells of how a pair of mallard ducks choose an island in the Boston Public Garden to raise their family. We first meet Mr. and Mrs. Mallard as they begin their search for a place to build their nest. Mr. Mallard suggests several locations, but to Mrs. Mallard, nowhere seems quite right. They decide to rest for the night on an island in the Public Garden lagoon, and then continue their search the next day.

The morning arrives and as the park comes to life, a Swan Boat passes by the ducks. Mr. and Mrs. Mallard mistake the human-powered catamaran for a real swan—at first believing they were snubbed by an arrogant swan—but then happily breakfast on the peanuts that the people on the boat throw to them. Just as Mrs. Mallard decides they should raise their family in the Public Garden, a passing bicyclist almost runs her over, and so their search begins again. After a very tiring day flying around Boston, Mr. and Mrs. Mallard decide to build their nest on an island in the Charles River.

They quickly settle into a routine of visiting the shore to get their daily meal of peanuts from a policeman named Michael. Soon afterwards, the ducks go through their molt and must wait until their feathers grow back before they can fly. In the meantime, eight ducklings are hatched by Mrs. Mallard, called Jack, Kack, Lack, Mack, Nack, Ouack, Pack and Quack.

Mr. Mallard decides it's time to take a trip to investigate the rest of the Charles River and arranges to meet Mrs. Mallard at the Public Garden after one week. While Mr. Mallard is gone, Mrs. Mallard shows her eight children how to swim, dive, and march along as ducks do. Remembering her near collision with the bicycle, she also shows them how to avoid the dangers of these strange wheeled objects.

The week passes quickly by, and Mrs. Mallard and her ducklings begin the journey to meet with Mr. Mallard. However, there are so many cars on Storrow Drive, that it's impossible to cross the busy highway to get to the Public Garden. Fortunately, their friend Michael the Policeman is on hand to stop the traffic and allow them to get across. To ensure the ducks' safety, Michael calls police headquarters and arranges with three other officers to stop all the traffic along the route, and Make Way for the gaggle of mallards. The ducklings march along in line, following closely behind their mother, just as she taught them. The people who see them along the way on Charles Street give them admiring looks and compliment them for being such a lovely family.

The story ends happily ever after with the mallard family making their home in the Public Garden, searching for peanuts and other food by day, and sleeping on their little island at night.