Increase Sumner (1746-1799) was a U.S. political figure and magistrate. He served as the first Federalist Governor of Massachusetts from 1797 to 1799. The Sumner Tunnel, which connects Boston Proper to East Boston, is named in honor of his son, Judge William H. Sumner.

Increase Sumner graduated from Harvard with distinction in 1767, and beginning in 1776, served three terms in the Massachusetts General Court (House of Representatives), as well as two terms in the Senate from 1780. He was a member of the Constitutional Convention of 1779-80, as also later of the convention that accepted the federal constitution. 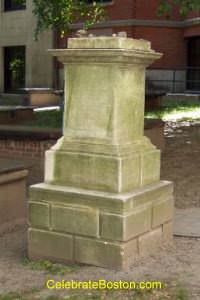 In August 1782, he was appointed an associate justice of the Supreme Judicial Court, and in January 1785, was added to the committee to revise the Massachusetts State laws. In 1796, though averse to being a candidate, he was elected governor, he was elected governor, and was three times reelected by great majorities. Sumner was a Federalist, a political party that had gained popularity in the state by 1796. He succeeded Samuel Adams as Governor. Sumner died before the beginning of his last term.

Increase Sumner was buried at Granary Burying Ground in Boston. His tall white marker is located in the northwest corner of the cemetery (far right corner from the front gate).

Here repose the remains of
INCREASE SUMNER,
Born at Roxbury
Nov. 27, 1746,
Died at same place
June 7,1799.
He was for some time a practitioner at the Bar;
And for fifteen years an Associate Justice
of the Supreme Judicial Court;
Was thrice elected
GOVERNOR OF MASSACHUSETTS
in which office he died.
As a Lawyer, he was faithful and able;
As a Judge, patient, impartial and decisive
As a Chief Magistrate
accessible frank and independent
In the vigour of intellectual attainments
and in the midst of usefulness
he was called by Divine Providence
to rest with his fathers,
he went down to the chambers of death,
in the full belief, that the grave
is the pathway to future existence.
As in life he secured the suffrages of the free,
And was blessed with the approbation of the wise,
So in death be was honoured by the tears of the patriotic
And is held in sweet remembrance
by a discerning
and affectionate people.
In private life,
He was affectionate and mild;
In public life,
He was dignified and firm,
Party feuds were allayed
by the correctness of his conduct,
Calumny was silenced
by the weight of his virtues,
And rancour softened
by the amenity of his manners.

Increase Sumner's son, William, helped develop Noddle's Island into a district of the City of Boston in 1833, which was officially named East Boston. William wrote a detailed history of East Boston that was first published in 1858.