"James Bowdoin (1726-1790) was an American political leader from Boston, Massachusetts. He served in both the colonial council and house and was President of the state's constitutional convention. After Independence, he was elected Governor of Massachusetts.

His ancestors [Pierre Boudouin] emigrated from France with the Protestants, who, on the revocation of the edict of Nantes, in 1688, took refuge in America. He was born in Boston in 1727, [attended Boston Latin School as a youth], and graduated from Harvard College in 1745. Neither dazzled nor corrupted by the early possession of a great estate, which he inherited on the death of his father, in 1747, he devoted himself to the cultivation of his mind, and to literary pursuits. Called by the troubled scenes which preceded the American Revolution, from retirement and the enjoyment of domestic life, he became one of the most decided and fearless leaders of the opposition to the measures of the British government. 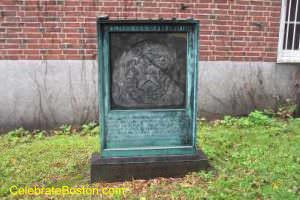 In 1769, his election as Counselor [Senator] was negated by Governor Bernard; and, in 1770, Hutchinson apologized to the British ministry for approving him at his election this year, by stating, that 'Mr. Bowdoin's opposition would be less injurious in the Council than in the House of Representatives.' His apology was not satisfactory to the British Court; for a special royal mandate compelled [Hutchinson], in 1773, to apply to Mr. Bowdoin, when again elected to the Council, his official [opposition].

During the most critical period of the Revolution, from 1775 to 1779, he 'took his station at the head of the Council, who were exercising the supreme executive and one branch of the legislative authority, and thereby exposed himself to punishment for this conspicuous overt act of treason.'

In 1785, Bowdoin was elected Governor of Massachusetts, but his tenure was not peaceful. He called up the militia and took major action to put down Shays' Rebellion, and as a result lost the election of 1787, placing John Hancock back in office.

In 1779, when the people of Massachusetts called a convention for the purpose of forming a Constitution for the State, Mr. Bowdoin, in this body, composed of 'as great a number of men of learning, talents, and patriotism, as had ever been assembled in the Commonwealth,' was elected its president. In this [position], he confirmed the opinion previously entertained of his talents and wisdom. Some of the most admired sections in the Constitution were of his suggestion, or were framed according to the plan he proposed. In the struggle for the chair of state, which succeeded, his friends were outweighed by the overwhelming popularity of Mr. Hancock."

James Bowdoin died in 1790 and was entombed at Granary Burying Ground in Boston. His tomb and marker are located in the southwest corner of the cemetery (far left corner from the front gate).