"John Endicott (1588-1665), sometimes Endecott or Endicot, was a colonial magistrate, soldier, and governor of Massachusetts Bay Colony. Endicott lived in Boston for only a few years near the close of his life. Salem Massachusetts was his place of residence from 1628, when he first came to New England, which was two years earlier than the large company led by John Winthrop.

Endicott was one of the original patentees of the Massachusetts grant and acted as Governor until Winthrop arrived. Endicott was once chosen Governor while Winthrop lived, and after his death he was elected chief magistrate for fourteen out of fifteen years, and died in 1665. 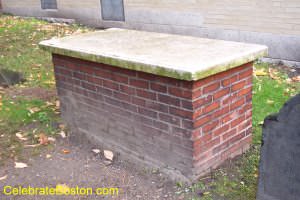 He had much energy of character, and was resolute and brave, and of a good education, though less liberal than that of Winthrop, Bellingham, and Bradstreet. In his religious views, he was bigoted, but no doubt conscientious and sincere. The spirit of bigotry raged, in a most unhappy measure, at that period, in Europe, as well as New England. It is most favorable that we live at a time today when a more tolerant spirit in religion prevails.

Endicott despised the Quakers and perceived them as a threat to the state religion (Puritanism) and to the community. Several Quakers were hanged while he was Governor, with other penalties pronounced including ears or tongues cut off, public lashings, and bread & water diet jail sentences.

Governor Endicott was more of a military character than Winthrop and Bellingham. If he had not their substantial wisdom, he had great energy of character, and was willing to be advised. His election as Governor for so many years near the close of his life, is proof of his popularity. Endicott was a zealous defender of civil rights of the Colony.

Endicott was interred at Granary Burying Ground in Boston. By the mid-1700s, his tomb had fallen into disrepair, and ownership was assigned to John Edwards because Endicott had no living descendants. The Edwards family was related to the Cheevers via marriage, so the current Cheever tomb is very likely Endicott's original resting place.