"Reverend John Davenport, of New Haven, 'the Universal Scholar,' was baptized, 9 April, 1597, at Holy Trinity Church, Coventry, England, where his father, Henry, and grandfather, Edward, had been prominent in times past. His mother, Winnifred, had the curious surname of Barnabit.

Very early a student at Oxford, he became, at the age of nineteen, a successful preacher in London, fearless alike before the plague and ecclesiastical authority. Meanwhile he studied until well into the mornings 'and never felt his Head ake, yet his Counsil was that other Students would not follow his Exemple.'

In 1633, under the influence of John Cotton, he fell into non-conformity, called his flock at St. Stephen's together, resigned, and retired to Holland. There he soon found himself at odds, early in 1635, over baptism, and, as Cotton Mather writes, 'he told his Friends, That he thought God carried him over into Holland, on purpose to bear Witness against that Promiscuous Baptism, which at least Bordered very near upon a Profanation of the Holy Institution.' 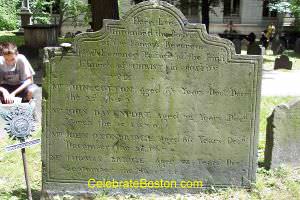 His Christian friends thought otherwise, and he returned to London. Two years later Cotton welcomed him to Boston, as Moses did Jethro, and he settled down at New Haven with his old Coventry friend, Governor Eaton, to become famous for his energy, his gravity, his 'ejaculatory prayers,' and the severity of the terms of his communion. Mather says that 'Davenport employed Golden snuffers so much in the Exercise of Discipline that the New Haven church became the New Jerusalem' — and then devotes five pages to the awful private life of a criminal who had been a revered member of Davenport's church.

While at New Haven in 1661, Davenport is said to have secreted Colonels William Goffe and Edward Whalley, the regicides [conspirators in the assassination of Charles I of England], in his own house, but in a long letter to Colonel Temple, King's agent, in August, he evades pitifully, saying 'that the poor colony, the Governor and magistrates wanted neither will nor industry to have served His Majesty in apprehending the two Colonels, but were prevented & hindered by God's overruling Providence.'

Some years later, Davenport very reluctantly accepted a call to Boston, where the Half-Way Covenant and other radical innovations were much in favor, and became the successor of John Wilson, 9 December, 1668; but as 'it is ill Transplanting a Tree that thrives in the Soyl,' he languished and died, 15 March, 1670. His wife was Elizabeth Wolley, who died 15 September, 1676, having had a son, John, and possibly other children. Davenport left many sermons and controversial works in printed form."

John Davenport died at Boston and was buried in a collective tomb with other devout clergymen. John Cotton rests in this same tomb at King's Chapel Burying Ground. The marker is on the left side of the grounds, just to the left of the Winthrop Tomb. The marker's engraving faces the street, and is not visible from the walkway.