John Winthrop the Younger (1606-1676), Governor of Connecticut, was born at Groton in Suffolk, England, son of the future Governor of Massachusetts, by his first wife, Mary Forth.

He was educated at the Bury St. Edmunds Grammar School, and for a time at Trinity College, Dublin, where he tried law at the Inner Temple, but abandoned this for adventure. In the ship of war Due Repulse he was at the Siege of La Rochelle in 1627, and thought of a voyage to New England the next year with Endicott, but set out for Padua, Venice, and Constantinople. On his return he approved his father's plan for settlement in New England, in this fine declaration:

'And for myself, I have seen so much of the vanity of the world, that I esteem no more of the diversities of countries than as so many inns, whereof the traveler that hath lodged in the best, or in the worst, findeth no difference when he cometh to his journey's end; and I shall call that my country where I may most glorify God and enjoy the presence of my dearest friends.' 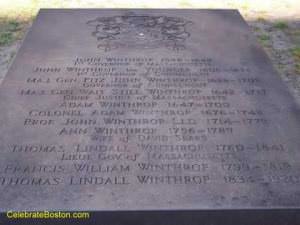 His interest in mechanics, medicine, and chemistry now gave way before his marriage, in 1630, to his cousin, Martha Fones; and in the summer he set sail, together with his father's family, for New England, where they were received with volleys of shot and great feasting. He was soon in charge of the settlement of Ipswich. In the early autumn of 1634, his wife's death was followed by his return to England. There he married, in 1635, Elizabeth, daughter of Edmund Reade and stepdaughter of the Rev. Hugh Peter.

Winthrop became by commission, on July 15th, 1635, Governor of the River Connecticut, with the places adjoining thereto, but the project did not prosper. In 1641 he set forth for England, and remained two years.

On his return he gave vigorous attention to the settlement of Pequot (New London, Connecticut), during 1645 and 1646. His father's death in 1649 influenced his decision to remain in the colony, where he became an assistant, 1651-1655; Deputy Governor, 1658; commissioner of the United Colonies, 1658-1660, 1663; and Governor, 1659-1676. His later career was burdened by Indian wars and boundary disputes, and by a voyage to England, where he obtained a charter for Connecticut, which included the New Haven Colony.

His love of science led to membership in the Royal Society for improving Natural Knowledge, and he was much at the Royal Court, where he received from Charles II a miniature of the royal [arm].

Winthrop passed away in Boston while attending a session of the Commissioners of the United Colonies, in April, 1676. He left seven surviving children, Governor Fitz-John, Chief Justice Waitstill, and five daughters, Elizabeth, Lucy, Margaret, Martha, and Anne.

John Winthrop the Younger died suddenly in 1676. He was placed in the Winthrop family tomb at King's Chapel Burying Ground. The tomb is located on the left side of the cemetery and is prominently marked.