"Louisa May Alcott, Transcendentalist novelist (1832-1888). The famous author of Little Women, Little Men, and Old Fashioned Girls, had made her beginning, as have many who have done any good or acquired fame in the world, by depending on herself. In other words, she was the architect of her own fortune, and has left be hind her works that will endure to gladden the hearts of millions of boys and girls. But she has done more. She has left behind her a record of a life within itself, a benediction and inspiration to every thoughtful girl who reads it.

While Miss Alcott always considered New England her home, she was actually born in Germantown, Philadelphia, November 29, 1832. Her father, Amos Bronson Alcott, after his marriage in New England, accepted a position as principal of a Germantown Academy, which he occupied from 1831 to 1834, and afterwards taught a children's school at his own residence, but he was unsuccessful and he returned to Boston in 1835, when Louisa was two years old.

From this time forward, Mr. Alcott was a close friend and associate of the poet and philosopher Emerson, sharing with him his transcendental doctrines, and joining in the Brook Farm experiment of ideal communism at Roxbury, Mass. The Brook Farm experiment brought Mr. Alcott to utter financial ruin, and after its failure he removed to Concord, where he continued to live until his death. It was at this time that Louisa, although a mere child, formed a noble and unselfish purpose to retrieve the family fortune. 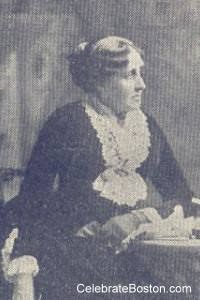 When only fifteen years of age, she turned her thoughts to teaching, her first school being in a barn and attended by the children of Mr. Emerson and other neighbors. Almost at the same time she began to compose fairy stories, which were contributed to papers; but these early productions brought her little if any compensation, and she continued to devote herself to teaching, receiving her own education privately from her father. 'When I was twenty-one years of age,' she wrote many years later to a friend, 'I took my little earnings ($20) and a few clothes, and went out to seek my fortune, though I might have sat still and been supported by rich friends. All those hard years were teaching me what I afterwards put into books, and so I made my fortune out of my seeming misfortune.'

Two years after this brave start Miss Alcott's earliest book, Fairy Tales, was published (1855). About the same time her work began to be accepted by the Atlantic Monthly and other magazines of reputation. During the winters of 1862 and 1863 she volunteered her services and went to Washington and served as a nurse in the government hospitals, and her experiences here were embodied in a series of graphic letters to her mother and sisters. These letters she revised and had printed in the Boston Commonwealth in the summer of 1863. They were afterwards issued in a volume entitled Hospital Sketches and Camp-Fire Stories. This was her second book, which, together with her magazine articles, opened the way to a splendid career as an author.

Being naturally fond of young people, Miss Alcott turned her attention from this time forward to writing for them. Her distinctive books for the young are entitled Moods (1864); Morning Glories (1867); Little Women (1868), which was her first decided success; An Old-Fashioned Girl (1869); Little Men (1871); Work (1873); Eight Cousins (1875), and its sequel, Rose in Bloom (1877), which perhaps ranks first among her books; Under the Lilacs (1878); Jack and Jill (1880), and Lulu's Library (1885). Besides these she has put forth, at different times, several volumes of short stories, among which are Cupid and Chow-Chow, Silver Pitchers and Aunt Joe's Scrap-bag. From childhood Miss Alcott was under the tutelage of the Emersonian school, and was not less than her father an admirer of the 'Seer of Concord.' 'Those Concord days,' she writes, 'were among the happiest of my life, for we had the charming playmates in the little Emersons, Channings, and Hawthornes, with their illustrious parents, to enjoy our pranks and join our excursions.'

In speaking of Emerson she also wrote to a young woman a few years before her death: 'Theodore Parker and Ralph Waldo Emerson have done much to help me see that one can shape life best by trying to build up a strong and noble character, through good books, wise people's society, and by taking an interest in all reforms that help the world, . . . believing al ways that a loving and just Father cares for us, sees our weakness, and is near to help if we call.' Continuing she asks: 'Have you read Emerson? He is called a Pantheist, or believer in nature, instead of God. He was truly a Christian and saw God in nature, finding strength and comfort in the same sweet influence of the great Mother as well as the great Father of all. I, too, believe this, and when tired, sad or tempted, find my best comfort in the woods, the sky, the healing solitude that lets my poor, weary soul find the rest, the fresh hopes, the patience which only God can give us.'

The chief aim of Miss Alcott seemed to have been to make others happy. Many are the letters treasured up by young authors who often, but never in vain, sought her advice and kind assistance. To one young woman who asked her opinion on certain new books, in 1884, she wrote:  'About books; yes, I've read Mr. Isaacs and Dr. Claudius [F. Marion Crawford fame], and like them both. The other, To Leeward, is not so good; Little Pilgrim was pretty, but why try to paint heaven? Let it alone and prepare for it, whatever it is, sure that God knows what we need and deserve. I will send you Emerson's Essays. Read those marked. I hope they will be as helpful to you as they have been to me and many others. They will bear study and I think are what you need to feed upon now.' The marked essays were those on Compensation, Love, Friendship, Heroism, and Self-Reliance.

Miss Alcott's kindness for young people grew with her advancing years. Being a maiden lady without daughters of her own, she was looked up to and delighted in being considered as a foster-mother to aspiring girls all over the land. How many times she wrote similar sentences to this: 'Write freely to me, dear girl, and if I can help you in any way be sure I will.' This was written to one she had never seen and only four years before her death, when she was far from well.

Miss Alcott died in Boston, March 6, 1888, at the age of fifty-six years, and just two days after her aged father, who was eighty-five years old, and who had depended on her many years, passed away. Though a great advocate of work for the health, she was, no doubt, a victim of overwork; for it is said she frequently devoted from twelve to fifteen hours a day to her literary labors, . . . besides looking after her business affairs and caring personally for her old father, for many years an invalid. In addition to this, she educated some of her poor relatives, and still further took the place of a mother to little Lulu, the daughter of her sister, May, who died when the child was an infant."

— The Literature of America and Our Favorite Authors, Birdsall & Jones, p.380