The Mayor won over his opponent, Thomas J. Kenny, by a majority of 5,700. He had long experience in municipal affairs as member of the old City Council, subsequently as an alderman, and lastly as a member of the City Council established by the charter of 1909. Still later he had been a member of Congress.

Mayor Curley was the first in the long line of Mayors who in his inaugural address devoted considerable space to the need of developing the industries of Boston and of the greater utilization of its port.

Among his other recommendations were: monthly conferences on city planning, in which committees representing all the leading interests should participate, the establishment of a central purchasing department in charge of an expert buyer at wholesale, to meet all requirements for supplies; the abolition of the correctional institutions for boys, more durable street construction, etc.

Mayor Curley took a strong stand for a gradual cancellation of the city debt by the substitution of a pay-as-you-go policy for the wasteful habit of borrowing, with its heavy annual interest charges and temptations to extravagance.

In 1915, a bill was submitted to the General Court [state legislature], on his instigation, calling for increased tax rates in order to make his financial plan possible. But the opposition was too strong; the real estate interests contended that they should not stand an increase of $2 or more in the tax rate even if an eventual advantage might accrue.

A notable event during Mayor Curley's administration was the establishment of the segregated budget system to have supervision of all details and method in preparing annual appropriation schedules of the departments. The total debt (exclusive of the rapid transit loan) decreased $5,799,141; the number of city employees under the control of the Mayor was reduced by 117, while the departmental expenditures increased only 11.93 per cent, or an average of 2.98 per cent per year, as compared with 5.69 per cent average yearly increase in the preceding administration.

Like many of his democratic predecessors, Mayor Curley has been a persistent advocate of home rule for Boston, maintaining that the parental oversight of Boston affairs by the General Court holds back the development of the city and is an obstacle to the effectiveness of the municipal government."

Along the Freedom Trail just past Faneuil Hall, is Mayor Curley Park, which contains two stations of the famous Boston Mayor. 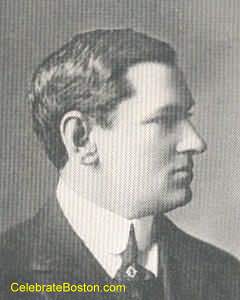