Mayor Collins took office after a distinguished public career of four years in the State Legislature, six years as Congressman, and four years as United States Consul General at London. In his first inaugural address, he said: 'The chief trouble with commercial Boston is that it seeks to do all its best business in one square mile of land. The result is congestion, very high rents within that area, and somewhat ragged prospects beyond. More business centers of the first class...will make Boston a better and a greater city. For this purpose I may be counted an expansionist of the most extreme type.'

He favored a new city hall costing from $1,500,000 to $2,000,000, worthy of the city and located at some distance from the present site, so that it might help to create a new center of activity, and he was opposed to any temporary makeshift that might bring the problem to the front again in ten years.

Mayor Collins deprecated the high debt and running expenses, and deemed rigid economy in all departments as imperative. Boston was getting back to the practice of borrowing for improvements. The net debt in 1902 increased nearly $6,936,000, which was the largest advance for years. Mayor Collins remarked, 'The obvious fact cannot be ignored that Boston either plunges or is rushed into deeper debt every year.' He engaged an expert municipal accountant to discover and check waste, and several special reports were submitted by him. He persistently objected to needless and questionable drafts upon the city's borrowing power for public improvements, whether demanded by the General Court [state legislature] or requested by the City Council. For instance, in 1902, he vetoed a loan order amounting to $2,494,300 passed by the City Council, containing over twenty appropriations for playgrounds, bath- houses, wardrooms, etc.

Again, in 1905, he vetoed the City Council's approval of an act by the General Court commanding the City Hospital Trustees to erect a relief station [small hospital] in East Boston at an expense not exceeding $100,000, the City Treasurer having been ordered to issue bonds for the amount without the approval of the Mayor. 'It is doubtful,' the veto stated, 'whether any such insidious and sinister assault upon self-government in Boston has been hitherto attempted, but it is certain that none like it has yet been imposed upon us.'

On the death of Mayor Collins, September 14,. 1905, Daniel A. Whelton, Chairman of the Board of Aldermen, became Acting Mayor, serving until January 1, 1906." 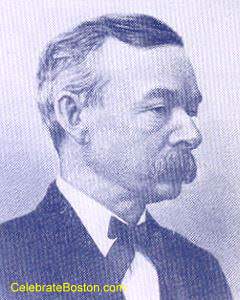