"Nathaniel Byfield, first judge of the Court of Vice-Admiralty, was born in 1653, at Long Ditton, Surrey, England, the twenty-first child of Richard Byfield, rector there, and grandson of the vicar of Stratford-on-Avon. His father, as a member of the Westminster Assembly, helped to prepare the 'Westminster Shorter Catechism' [Protestant Doctrinal Statement]. His mother, Sarah Juxon, was, like many early New Englanders, 'nearly related' to an Archbishop of Canterbury.

Byfield arrived in Boston in 1674, and the next year married Deborah, daughter of Captain Thomas Clarke. Having been drafted to fight the Indians, he based a claim for exemption on XXIV Deuteronomy 5. At the close of King Philip's War he invested heavily in Rhode Island lands, becoming a settler at Bristol, Rhode Island, and living part of the time at Pappoosquaws Point better known in connection with Nathanael Herreshoff, the famous yacht builder. 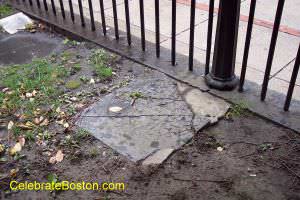 Byfield joined the Ancient and Honorable Artillery Company in 1679, was a member of the General Court in 1696 and 1697, and served as speaker in 1698. He was commissioner for forming the excise, and judge of probate for Bristol County, as well as of the Inferior Court of Common Pleas in Bristol and Suffolk. In June, 1710, he was suspended from the office of judge of probate 'for unmannerly and rude behaviour,' but resumed office in December, 1715. He was the first judge of the Court of Vice-Admiralty from 9 June, 1699, to 20 May, 1700, when Wait Winthrop obtained the place. Byfield threatened Winthrop and succeeded, through Governor Dudley, in securing his removal in 1701; he obtained the office for himself in December, 1703, holding it until 1715, and a third time from 1728 to 1733.

In earlier years the judge exercised much influence through his political alliance with Dudley and his marriage, in 1718, to Governor Leverett's daughter Sarah, following the death of his first wife. Cotton Mather, in February, 1702 or 3, received a visit from Governor Dudley, whom Mather advised to allow no people to say that the governor's policies were dictated by Byfield and Leverett. Mather continues: 'The Wretch went unto those Men, and told them, that I had advised him, to be no ways advised by them: and inflamed them into an implacable Rage against me.'

Byfield was a man of positive traits, dictatorial and overbearing, ambitious and revengeful, yet so sound that no decision of his was ever, upon appeal, reversed by a higher court. He printed and gave away thousands of copies of the 'Shorter Catechism;' he strenuously opposed the witchcraft delusion, gave hundreds of pounds yearly in charity, and devoted his eloquence freely to public affairs.

He died between the hours of one and two of the morning of the 6th of June, 1733, at Boston, and was entombed at Granary Burying Ground. Two of his five children grew to maturity, one the wife of Lieutenant Governor William Tailer, another the wife of Edward Lyde, whose son, Byfield Lyde (son-in-law of Governor Belcher), was his chief heir.

At Granary Burying Ground, Byfield rests in Tomb #49 or #50, which is marked by stone bearing the Lyde family crest, along the Tremont Street fence.

— The Founders, Volume I, By Charles Knowles Bolton, 1919