During the Civil War, Castle Island was used as a military training site, and as a proving ground for newly manufactured cannon. Testing was necessary to ensure that weapons did not explode or misfire and injure or kill the operators. Artillery cast at the Cyrus Alger Foundry in South Boston were tested here. The following is a paraphrased excerpt from Ballou's Monthly Dollar Magazine, from August 1864, describing such testing:

In a small neck of land, adjacent to Fort Independence, hundreds of guns have been tested during the past two years. The cannons were accepted or rejected by government officers according to the toughness of the metal, and by the manner in which the weapons sustained the double-charges they were loaded with.

The picture below shows how the ten and eleven inch guns are tested. After a gun has been manufactured, it must be subject to proof. This proof consists in selecting a gun from a lot, and firing one thousand rounds from it, which it must sustain. The other guns from this lot are fired a limited number of times, with a small excess of powder. The weapons are fired with a shell that weighs 134 pounds, either filled or empty, depending on the requirement. The range is about two miles with 15 pounds of powder.

The shells are discharged into an enclosure filled with earth. The cannon are placed on a platform, and fired by a lanyard [cord with handle]. Next to the gun is a protective area, into which the men retreat when it is fired. The shell buries itself in the enclosure, and throws up a cloud of dust and smoke mixed with stones.

Since the war commenced, testing guns has gone on here almost uninterruptedly, and thousands of dollars worth of powder have been burned up, but the expense is a necessary one, and a useful one. 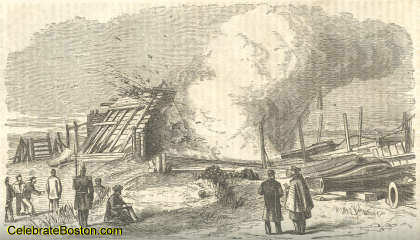