Jesse Pomeroy (1859-1932), was America's first infamous underage murderer. At the age of 12, he had tied up and tortured several young boys in Chelsea, Massachusetts. He mercilessly beat his victims, and permanently maimed them by slashing with a knife or by knocking out teeth.

After moving to South Boston in 1872, he continued to capture and torture more boys, all between the ages of seven and eleven. According to the April 24, 1874 New York Times, Pomeroy had "stripped, gagged, tied to a telegraph pole, whipped and cut with a knife in the head" one of his young victims. Pomeroy's father worked in a market in downtown, and his mother became a respectable dress maker in South Boston. 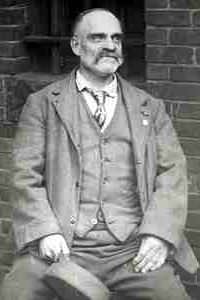 The July 6, 1875, Baltimore Sun describes how Pomeroy deceived and tortured one of his victims: "He met one little boy, when there was snow on the ground and the thermometer near zero, standing looking into a window; he told him a story as to how a man wanted a bundle carried a short distance, and as he had a sled with him he would give the boy a quarter if he would assist him. Consent being given he led this boy away some two miles to a shed, entered and made the boy strip to the skin, tied him up, took out his knife, stuck it into each cheek, drawing it away looking at the point to see the blood, then caused the little fellow to don his clothing, placed him on the sled, and drew him to the boy's own door and left him."

Eventually the police arrested Jesse, and he was convicted and sentenced to six years at the Boys Reform School at Westborough, Massachusetts. Pomeroy was very intelligent, and because of good behavior, was released after serving only one year and five months.

At age 14, on April 23, 1874, Jesse Pomeroy tortured and brutally murdered a four-year old boy in a marsh in Dorchester Bay. The boy was stabbed several times and his body mutilated. During the immediate police investigation, the murder scene footprints indicated: "The tracks showed plainly that Pomeroy jumped off the wharf into the soft clay, and then took his little victim down, lending assistance by a swing of the arms. The boots of the murdered boy exactly fitted the smaller prints and corresponded precisely with the plaster casts taken from the prints." Mud in Pomeroy's boot soles also matched the curious color of the mud at the crime scene. Later that day, Pomeroy was taken to the coroner's office to view the body. He then confessed to the murder and said he wiped blood from his knife by dipping it in the mud.

In July 1874, Jesse Pomeroy also confessed to the slaying of a 10-year old girl who had been missing since March. He had coaxed her into the basement of his mother's dress shop, cut her throat, and then buried her under an ash heap.

When asked why he committed the murders he simply stated "I couldn't help it."

A sensational trial took place and Jesse Pomeroy was found guilty in December 1874. He was sentenced to death, but Governor William Gaston would not sign his death warrant due to his age of only 14. The frustrated Governor's Council, which could legally commute Pomeroy's sentence to life in prison, voted twice to affirm Pomeroy's death sentence. A third anonymous vote in 1876 by the council did commute his sentence, and Jesse spent the next 56 years in prison for the brutal murders.

Pomeroy was called The Boy Fiend, The Boy Murderer, The Young Demon, and The Child Murderer by the press of his day.