Capital punishment prevailed in Puritan Boston. The Bible was the guide for the Founding Fathers in doling out justice. Needless to say, they did not take too kindly to immoral behavior.

One the most famous cases is that of Daniel Fairfield. In 1642, for "grossly immoral conduct" [molestation of two girls under the age of 10], he was sentenced to be: "Severely whiped at Boston the next lecture day & have one of his nostrills slit so high as may-well bee, & then to be seared, & kept in prison, till hee bee fit to bee sent to Salem, & then to bee whiped againe, & have the other nostrill slit & seared; then further hee is confined to Boston neck [the peninsula of Boston], so as if hee be found at any time dureing his life to go out of Boston neck, that is, beyond the railes toward Roxberry, or beyond the low water marke, hee shalbee put to death upon due conviction thereof: and hee is also to weare an hempen roape about his neck, the end of it hanging out two foote at least, & so often as he shalbee found abroad without it, hee shalbee whiped; & if hee shall at any time hearafter attempt to abuse any p[er]son as formerly, hee shall bee put to death, upon due conviction." 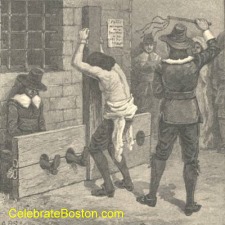 For many years, despite repeated pleas of Fairfield's wife that his sentence be commuted, the man with the mutilated nose might have been seen in the streets of Boston with a rope hanging around his neck—a constant reminder to him that if he sinned again he would be hanged. Finally, in 1652, 10 years after sentence had been imposed, the court, in response to the pleadings of Fairfield's wife, allowed the rope to be set aside. [Sexist mores at the time are likely what kept Mr. Fairfield from being executed.]

The first execution in Boston was in the fall of 1637. One year later, the next victim of the gallows was that of a Salem woman named Dorothy Talbye. She was insane, and was considered a public nuisance. Governor Winthrop described her as having "melancholy or spiritual delusions," which led to her public whipping. Soon after, "she was so possessed with Satan, that he persuaded her (by his delusions, which she listened to as revelations from God) to break the neck of her own child."

Talbye was transported to Boston and made to climb a ladder at the execution place. When the support was pulled away from under her feet, she grasped at the ladder and swung struggling until she slowly strangled to death.

Six years later, two more persons went to the gallows at Boston; James Britton, and Mary Latham, a young wife, 18 years old, from Plymouth. They had been found guilty of adultery.

It is believed that Latham had been rejected by a young man for whom she had great affection, and subsequently vowed she'd marry the next man that came into her life. She then impulsively married an elderly man, for whom she had no affection.

Latham became what could be described today as a "party girl," as she was soon courted by young men and romanced with wine. Such behavior was not tolerated, and her lifestyle was investigated by the Puritan theocracy. She eventually confessed that attempts were made to corrupt her. More than 12 men were implicated in fostering her behavior, of which two were married. A night of revelry resulted in an encounter with James Britton, which led to their incarceration.

So, without a single witness observing their crime, James Britton and Mary Latham were hanged by the neck until dead for an implicit act of adultery.

"They both died very pentinent," says John Winthrop, "especially the woman, who had some comfortable hope of pardon for her sin, and gave good exhortation to all young maids to be obedient to their parents, and to take heed of evil company."