In Puritan Boston, celebrating Christmas was considered an act of the Devil. Christmas was part of the prescribed worship of the Catholic Church and Church of England, to which the Puritans did not acknowledge, and did not tolerate.

From the earliest settlement of the town in 1630, Christmas was not observed. In 1651, the following law was passed by the General Court:

"For preventing disorders arising in several places within this jurisdiction, by reason of some still observing such festivals, as were superstitiously kept in other countries, to the great dishonor of God and offense to others: It is therefore ordered by this Court and the authority thereof, that whosoever shall be found observing any such day as Christmas or the like, either by forbearing labour, feasting, or any other way upon any such account as aforesaid, every such person so offending, shall pay five shillings as a fine to the country." 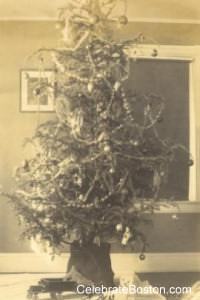 Easter was also considered a heathen festival and banned. A somber Thanksgiving Day was the Puritan way of recognizing the will of God.

King Charles described Bostonians as a bunch of rebellious dogs, and in 1679 initiated an effort to repeal the colonial law. After two years of procrastinating, the Massachusetts General Court repealed the law in May, 1681.

The King's mandate was still pretty much ignored by the Puritans, and judge Samuel Sewall wrote in his diary on Christmas Day in 1685: "Carts come to Town and Shops open as is usual. Some somehow observe the day; but are vexed, I believe, that the Body of the People profane it, and blessed be God no authority yet to Compell them to keep it."

Until 1724, Sewall continued to chronicle and find satisfaction that most businesses did operate on Christmas Day, in defiance of the Mother Country's religious tradition.

Please note that kissing in public was also a crime, and that Judge Sewall is interred at Granary Burying Ground in Boston.