On April 10, 1980, 23-year old James P. Riva II beat his elderly grandmother in her wheelchair, shot her twice using gold-painted bullets, and then set her body on fire using dry gas as an accelerant. He also set her house on fire to conceal the crime. Riva's 74-year old grandmother, Carmen Lopez, had provided for him at times, and her death was a huge tragedy.

At his later trial, Riva's lawyer presented one of the strangest criminal defenses in Massachusetts history. Riva pled not guilty to murder by reason of insanity, and asserted that his grandmother was a vampire and was going to kill him by drinking his blood while he slept. Voices had told him that he would die unless he killed his grandmother. 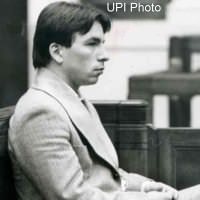 James Riva was likely afflicted with some type of mental illness, possibly paranoid schizophrenia. His counsel openly stated that Riva had killed his grandmother, but he did not believe he was criminally responsible and should be placed in a mental institution. Riva had a long history of mental issues. In the previous five years, he had reportedly killed a cat, operated on it, and then drank its blood; was preoccupied with blood, sex and violence; had beat a horse on the head, took some of its blood using a syringe, and mixed it with crackers and consumed it; and was a day-sleeper and insomniac. Voices in his head supposedly told him what to do, and at times commented on his every move.

In June 1980, Riva's mother visited him in prison. He made many statements to her about being a vampire, which became the basis for the Vampire Killer label. At his trial in October 1981, his mother testified about these conversations. Riva told her he was a vampire for four years prior to the murder, that voices had told him to drink blood so he could live for a long time, and that he had been talking with the devil. He said he met 200-year old vampires before, and they told him to use gold-tipped bullets to kill other vampires.

About drinking his grandmother's blood after the murder he also said, "She was old and dried up, and I kept telling the voices all day I couldn't do it." Thus, reports about Riva drinking blood from his grandmother's wounds are likely a myth.

The jury rejected Riva's defense and he was convicted of second-degree murder. He was sentenced to life imprisonment at Walpole State Prison, and also received a 19 to 20 year sentence on the arson charge to be served concurrently. The fact that he tried to conceal the murder did not bode well for his insanity defense. Riva had parked his car about 150 feet away from his grandmother's house on the day of the murder, and then later burned her body and home to conceal the crime.

At his 2009 parole hearing, Riva said he was abused as a child. That he has gained control of his mental illness using medication, and has become quite religious. Riva was reportedly not remorseful about his grandmother's death, and his parole was not granted.