Hub of the Universe Origin

Boston is often referred to as "The Hub," which is short for "The Hub of the Solar System" and also "The Hub of the Universe." The original "Hub" is actually a physical place: the Massachusetts State House. Oliver Wendell Holmes coined the phrase in 1858.

Holmes wrote a series of articles in the Atlantic Monthly called The Autocrat of the Breakfast-Table. In Volume 1, Issue 6, he wrote: "[The] Boston State-House is the hub of the solar system. You couldn't pry that out of a Boston man, if you had the tire of all creation straightened out for a crowbar." The reference humorously (and arrogantly) implied that Boston was the center of everything commercial and intellectual at that time. 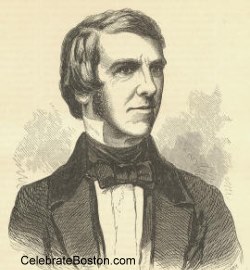 The State House stands atop Beacon Hill, and for nearly one hundred years dominated the landscape of the city. In 1858, the then copper-clad dome of the State House stood prominently out in any illustrations of the city. The pinnacle of Boston's city seal is also of course the Massachusetts State House. For this reason, Holmes likely nicknamed this building as the Hub of the Solar System.

Autocrat at the Breakfast Table was most likely controversial due to the boastfulness of the author. By the early 1860s, the State House represented the Hub of the Solar System, but the city itself quickly gained the much greater status as Hub of the Universe. Contemporary authors thought it was probably Holmes that coined both phrases.

Due to the wide circulation of the Atlantic Monthly, and the fame of Holmes in literary circles, the term Hub of the Universe was considered arrogant and even offensive at that time. A western newspaper stated that if Boston was Hub of the Universe, then the Northwest was the "axle" of the hub. In Life and Society in America by Samuel Phillips Day (1880), the author conjectures that the nickname was originally bestowed upon Boston by New Yorkers—induced by jealousy—to make Boston appear to be a more commercial and greedy community than New York.

Today, Boston is still known as The Hub, with the controversial origins of the nickname long forgotten. The term is most often used during sports broadcasts, as many synonyms are applied to make the dialogue more exciting.

Below is a postcard of a wagon wheel from about 1910. Inside the wheel is a view of Faneuil Hall, Old State House, State House, Public Library, Swan Boat, South Station, Public Garden flowers, Park Street Church, King's Chapel, Old North Church, and Old South Meeting House. Please note the golden dome of the State House is in the "Hub" or center of the wheel!

Oliver Wendell Holmes is also credited with coining the term Boston Brahman, a nickname for the wealthy enlightened class of Boston's mid-19th century. 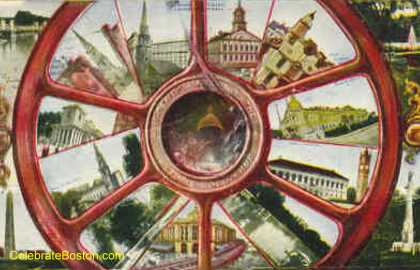 Note What is in the Hub of the Wheel !