Harvard University was conceived in 1636, and began operating in 1638. Reverend John Harvard died in 1638. He bequeathed half his fortune, and his library, to the college. In 1639 the school was named after him. Harvard Square sprouted around Harvard Yard and the college. The square a cross between Greenwich Village in New York and Piccadilly Circus in London.

In summer, there are alternative rockers hanging out at the news stand at the center of the square. There are shops, health food stores, juice bars, restaurants, cafes, and a theater in the general vicinity. It's a great place to spend an entire day exploring. The square can have an international flavor. 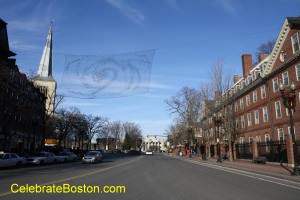 In winter, visiting Harvard Square can be a strange experience, and is more like walking around Times Square in New York in the mid-1980s. There may be homeless or mentally ill people hanging around the subway kiosk. There may be eccentric elitists or business people wandering about the square ready to challenge you on whether you took a photo of them. Or there can be religious sect members handing out pamphlets or pan-handling for money.

It is suggested to take the MBTA Red Line to Harvard Square for access. Driving in Harvard Square is very confusing if you do not know your way around, as there are many one-way streets and it can be very congested. 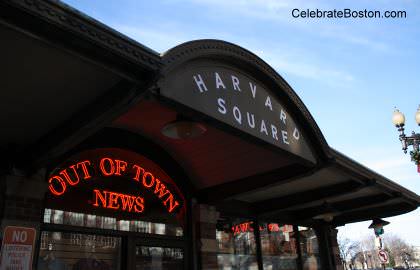 Out Of Town News Icon