The Salem Willows Amusement Park, or The Willows as it is often called, is a 35-acre waterfront recreational area, set on a rocky peninsula that juts out into Salem Harbor. Its grassy knolls offer ample picnic areas with stunning views of Salem Sound and the Harbor itself, where sailboats can be seen bobbing on the ocean. The park's setting also allows visitors to stroll along a generous portion of Salem's 18 miles of waterfront, and also enjoy a long pier that is great to stroll along or to fish from.

Salem Willows is approximately 22-miles north of Boston, and is just a short drive from Salem's tourist destinations.  It was designated as a public park in 1858, and is a popular recreational area for both locals and visitors alike. Every aspect of the park is steeped in a rich history, from the food you can buy to the entertainment and activities available there. It was originally reached by trolley car and was once the home to a roller coaster. 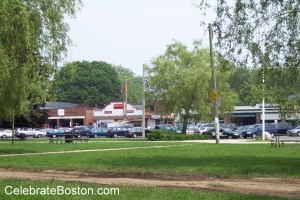 The park is named after the European White Willow trees planted there in 1801. Their original purpose was to allow patients from a nearby smallpox hospital to enjoy a shady walk while convalescing, and to this day visitors still enjoy the shade provided by their majestic canopy.

The beach at the Willows is a very popular place to watch the 4th of July fireworks, as they offer spectacular views of not only the Salem fireworks, but also the fireworks displays of both nearby Beverly and Marblehead.

The entertainment section is comprised of four rides and a small mini-golf course. Kiddieland houses the original Flying Horse Carousel created by Bavarian woodcarver, Joseph Brown (1866). The carousel still offers a fun ride today, although the original wooden horses were sold to Macy's Department Store in New York City in 1945 for their Christmas displays. The two arcades at the Willows contain vintage pinball machines, classic games like Pac-Man, claw-machines, as well as many modern virtual reality games. There is also a mainstay antique Fortune Telling machine. The Willows Casino offers fun for all ages where visitors can play games of chance to win prizes by accumulating vending tickets.

The park's south side is also where you can find several take-out stands. The area was originally known as Restaurant Row, where fresh seafood and other gastronomical delights were served to diners. Although the last of the original restaurants closed in the 1940s, you can still get fast food at the park including seafood, pizza and Chinese food.

The most famous stand at the Willows is the renowned E. W. Hobbs store, which has been in operation since 1897. They offer salt water taffy, home made ice-cream, and what some people have described as the best popcorn in New England. The store has an old-fashioned spiraling taffy machine, and people can watch from the sidewalk how the delightful candy is made. It is believed that Everett Hobbs and William Eaton sold the first ice-cream cone in America at the Willows in 1906.

There is free entertainment at an outdoor music pavillion during the summer. A young Duke Ellington played at the old bandstand at the Willows in 1923. In 2003, jazz vocalist Cassandre McKinley performed here. The park has also seen performances by Count Basie and Louis Armstrong, and the tradition of popular summer jazz concerts continues to this day.

In summary, Salem Willows is a great destination to visit. The park still has everything one needs to keep an entire family entertained for the day, whether it's a peaceful picnic under the weeping willow trees, walking the rocky shore and enjoying the ocean breezes, or an action-packed arcade session with the kids. The Willows can be considered the last old-fashioned amusement park in the state.