On September 23, 1983, a natural gas regulator failed and caused a gas surge into many homes in East Boston. At about 3:30 in the morning, a water main broke, which damaged the underground natural gas valve. The result was a large surge in pressure throughout the neighborhood.

The Mama Catina's Restaurant at Porter and London Streets exploded, and burst into flames. The building had a large billboard on its roof which became unstable. This was the most serious fire caused by the gas surge, and the remains of the building were torn down within days after the explosion. 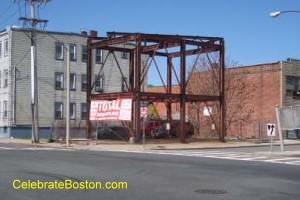 The fire and police departments cut-off access to East Boston. The police department used megaphones to ask residents to shut off gas lines in their homes. Many of the valves were extremely old, and had seized and could not be closed. Hundreds of people wandered about the streets in the early morning hours in fear of fire due to the gas surge. Luckily, no injuries resulted from this strange accident. An excerpt from the September 23, 1983 Boston Globe describes the seriousness of the incident:

"Altogether, the Fire Department received 750 calls from East Boston between 3:30 and 10 a.m. Twenty-two calls were fires that caused damage, 121 more were calls from residents who saw flames shooting from stoves and other gas equipment. The remainder were calls from persons who smelled gas.

At 38 Morris st., Laura [—] was awakened by the smell of gas in her first-floor apartment about 3:30 a.m. and discovered the kitchen ablaze.

The anxious mother ran back to her bedroom and grabbed her sleeping 5 month-old daughter, ... from her crib. [She] first tried to escape through the kitchen to the back door, but an explosion blew out the kitchen windows and spread the flames. She turned and fled out the front door to safety."

If the gas surge had happened during winter, with many gas furnaces operating, the results could have been catastrophic.

As a footnote, this editor lived about three blocks from Mama Catina's in 1983, and had walked up Porter Street near the restaurant at about 1:30 am. When the gas surge happened, I woke up, and had thought a large car accident occurred in nearby Central Square. I thus had slept through the event (thankfully) having a newer stove that shut-off its pilot lights during a surge (the water heater in the basement must have briefly been a flamethrower though).

The Tremont Street Explosion of 1897, and Paramount Hotel Fire of 1966, were both caused by a natural gas leaks; several people tragically lost their lives due to these accidents.