On Tuesday March 17, 1970, the first death caused by air piracy in U.S. history took place in Massachusetts air space. A lone gunman, with a bullet still lodged in his head from an earlier incident, brandished a .38 revolver and demanded to be taken to the cockpit of an Eastern Airlines DC-9. The flight attendant complied. The pilot and copilot struggled with the hijacker, and the copilot was shot in the chest. The copilot was able to disarm and shoot the gunman three times before passing away. The pilot amazingly landed the aircraft after being shot twice himself.

John DiVivo boarded the Eastern Airlines shuttle bound for Boston in Newark, New Jersey. The 73-person flight was completely normal until passing over Franklin MA, about 30 miles south of Logan Airport. DiVivo had smuggled a .38 revolver aboard the plane, and when the flight attendant asked for the $15.75 fare, he said he had no money, and pulled out a revolver and told her to take him to the pilots. On entering the cockpit, DiVivo just stated "take me east." 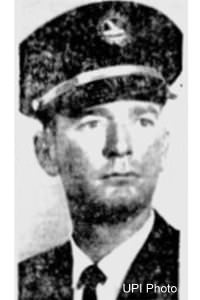 Captain Robert Wilbur Jr. and Copilot James Hartley were in final approach for landing. The flight attendant was told by the Captain to go back to the rear compartment and calmly let the passengers know that everything was fine with the flight. After a struggle, DiVivo shot Hartley in the chest and mortally wounded him, and also shot Captain Wilbur twice, once in each arm. Hartley fought DiVivo, disarmed him, and then shot him three times with the revolver. The entire event took place only 10-15 miles away from Logan, at an altitude of between 3,000 and 5,000 feet.

Captain Wilbur landed the DC-9 after being shot twice and fighting off the hijacker. A passenger later stated that he heard two pops that sounded like shots from a "cap gun." He also said the plane fluttered a bit and dropped steeply and quickly, but the result was a smooth landing. Once on the ground, Captain Wilbur radioed the tower and said "My pilot is shot—shot. Where the hell do you want me to park this thing?"

It is a great tragedy that James Hartley lost his life in an effort to protect the passengers and crew aboard Flight 1320. He was the first person killed during a hijacking in American airspace. James Hartley and Captain Wilbur were proclaimed heroes, and on March 24, 1970 the U.S. Senate passed a resolution that commended them both for "extraordinary heroism and competence."

DiVivo was charged with murder, and arraigned at East Boston District Court. He was sent to Bridgewater State Hospital for mental evaluation and then to Suffolk County Jail at Charles Street. While awaiting trial in jail, DiVivo killed himself on October 31, 1970. He had tied a neckerchief to his cell bars and hanged himself at about 3:00 in the morning.