On December 4, 1921, the last car of a Forest Hills Yard train derailed, with the inertia pushing the car into another train that was heading into the station. The forward wheels (truck) of the train fell into the street below, just missing a streetcar. Thankfully, no one was injured in this freak incident. If the accident had occurred during business hours, there could have been a great tragedy. The December 5, 1921, Boston Globe describes the accident:

"As yard motorman Charles W. was driving a train in the Forest Hills yards on the Elevated structure, near Asticou road, at 11:45 last night the last car jumped the rails and sideswiped a train the was proceeding into Forest Hills station. The forward trucks of the car bumped along the ties and, swerving back across the track, hurtled to the street below with a crash that could be heard for a long distance. 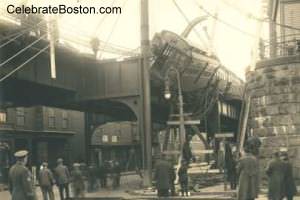 The body of the car remained on the track and an end hung over the structure in momentary danger of slipping off into the street. The car that was sideswiped also left the tracks. Guard F.E.A. was the only occupant of this car, and he was able to jump from his position outside the back door into the next car in the rear. There were no passengers on either train.

As the big truck fell into the street, it just missed falling upon a surface car that was proceeding toward Roslindale. Sergt. D. of the Forest Hills station saw the big truck as it was about to fall. He ran to the approaching trolley car and signaled the motorman to stop. He did so in time to prevent what might have been a catastrophe."

The image above is facing south. A crane is lifting or tying down the far end of the car. The abutment on the right is where an old railroad tower stood for many years.