On September 17, 1922, a streetcar heading into the old Harvard Square trolley tunnel failed to stop and crashed into several other cars in the station. The Boston Globe had noted that the trolleys did not telescope into each other, emphasizing the large force of the collision. Twenty-two people were injured, with two seriously hurt.

A baseball game in North Cambridge had lined up the streetcars heading to Harvard Square to connect with the Cambridge-Dorchester Subway trains (today's Red Line). The streetcars were entering the tunnel from the incline at Mount Auburn and Brattle Streets. A two-car trolley and a single car had stopped to unload passengers, leaving enough space behind them for another two-car trolley to unload. All of the trolleys were full of passengers. The September 18, 1922 Boston Globe, describes the accident: 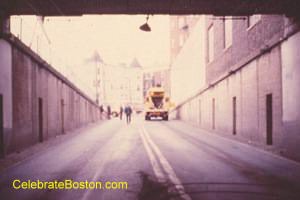 "An underground crash, involving three trolley cars, two trailers, much confusion and some panic, and calling into play three police and two private ambulances to take 22 persons to the Cambridge Municipal Hospital, where a 5-year-old boy was found to have a broken thigh and a 61-year-old woman to have fractured ribs and internal injuries, cause much excitement in the Harvard-sq Subway station yesterday afternoon.

Out at Russell Field, in North Cambridge, the North Cambridge Club team had trounced the Salem Town team, 3 to 0, and a line of cars filled with passengers were plunging for the entrance of the subway. One car and its trailer [stopped] and were beginning to unload. A single car landed and was making ready to discharge some 75 persons.
...
[Another streetcar] came hurrying down the incline. The car went plunging past the [open space between cars], hit the single car ahead into the trailer and car ahead of that, and there was some falling down among the strap-hangers, and much breaking of glass. The cars did not telescope. The conductor of the single car was leaning against the rear glass when the crash came, but somehow escaped unhurt.

Then came the panic; women became hysterical, men rushed for the doors. Finally the cars were unloaded."