On January 10, 1888, a terrible railroad accident occurred at Haverhill Massachusetts. An express train from Boston jumped the rails at a switch, with one passenger car landing on its side on the Merrimac River Bridge, and a second car tossed into a huge water tower. At least a dozen people lost their lives that evening.

A broken wheel on one of the passenger cars had caused the accident. The Boston & Maine Railroad express train was traveling at about 30 miles per hour over a switch, causing the third car to sway violently. The rear wheels of the fourth car jumped the track, and the car was thrown sideways into an adjacent water tower. The water tower contained hundreds of tons of water. The tower collapsed, killing three men beneath it, and crushing the passenger car into timbers. About ten people were killed in the passenger car, with twenty or more people severely injured. The January 11, 1888 Boston Globe quotes one of the witnesses: 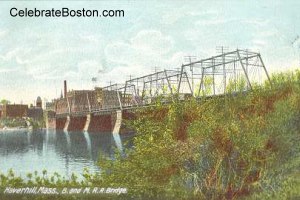 "As the destined train rushed along, the fourth car, just after it broke away from the fifth, struck against the tank, threw it over, allowing it to drop to the ground, crushing the three men to death who were seated beneath it. Besides putting the end to the lives of these section men, the tank, as it fell, crushed beneath it the fourth car, killing seven men, one woman, and a child who were within it. This made a total of 12 killed by the falling of the tank. All of those killed were terribly crushed and mangled. Before I left I learned that between 30 and 40 more were more or less injured, some crushed, others only scratched. A number of those who were injured will die of their wounds."

The third car behind the engine had also derailed and was dragged by the train onto the bridge. The passenger car swung violently along the wooden ties as it was dragged, and eventually fell onto its side and detached from the train. It was extremely fortunate the car did not plunge into the Merrimac River. The engine proceeded over the bridge into Haverhill Station, blowing its whistle to signal that an accident had occurred.

Inside the ill-fated car that struck the tower, a woman and her six year old son were both crushed to death, with the woman holding the boy tightly in her arms in an attempt to protect him from injury. Maternal instinct knows no bounds; and should always be honored.

The first sentence in the above Globe article stated "Ashtabula, with all its horrors, has been repeated." On December 29th 1876, the engine and 13 passenger cars plunged down a 90 foot embankment into the icy Ashtabula River in Ohio. Almost 200 people were crushed, burned, or frozen to death in this extremely sad accident.