On July 26, 1890, what was described as a tornado or cyclone swept down upon South Lawrence, Massachusetts. Eight people were tragically killed, with more than 25 homes completely destroyed. This event can be described in today's terms as a brief tornado or a powerful microburst, which is a sudden downdraft of air over a small geographic area.

A huge cloud appeared in the western sky that morning, and then there was complete calm. Suddenly a burst of air passed along the Merrimac River, the sound of which was described as being like that of artillery in battle. A shroud of death in the form of a violent gust of wind had descended upon South Lawrence. Sadly, the first victim of the storm was a switchman inside the railroad tower at the Salem Street Bridge. The tower was thrown 10 feet in the air and smashed into timbers about 300 yards away. The July 26, 1890 Boston Globe quotes one of the witnesses:

"At first the trees swayed a little and the grain bent down on the hills. Then shingles flew off from old roofs and the orchards sent down their unripe fruit. After about 30 seconds of [flirtation] the avalanche of wind broke and came tearing down upon the tenement houses and workshops and stores with the force of a Niagara. Big elms and maples that were planted with care away back in the days of the Salem witches, bowed their graceful tops to the streets, and snapped off near the roots as if they had been of chalk. Fences were lifted from trimly kept gardens and taken away to the estate of neighbors, 200 yards distant, and outhouses fell like grain before the reaper.

The storm had its birth among the hills to the south and west of Lawrence. Its course was a little to the north and east. The track it made was about 500 yards wide and some two miles long. In this path nothing was so strong as to escape injury. Some 50 or 75 buildings are [flattened], while 200 or 300 are slightly damaged.

One man who owned a house a short distance east of South Lawrence hurried to his home when he heard of the catastrophe, to find his place. His house had been blown over to the east, and while the leeward side was all jammed together, the windward front was lifted up 10 feet in the air. Fire was already beginning to blaze among the ruins. He urged his way among the timbers to the sitting-room, and there on the floor, under the piano, he found his wife. A pile of bricks, weighing 1000 pounds, was on top of the piano; at one end of the instrument was a big stick of timber; at the other was the all the flooring of the room above; they held up under all the pressure, and his wife was rescued alive and well."

Springfield Street, which runs parallel to the river, received the brunt of the storm. From about 9:15 a.m. to 09:18, the wind blasted down this street from Parker to Union. Several houses were completely blown apart. A woman and her two children were crushed to death in one house, with another women barely escaping death as she was protected in the only corner of her house that had remained intact.

It was extremely fortunate this tornado or microburst occurred while most residents were at work in the mills. Hundreds of people may have been killed if this event had occurred during night time. 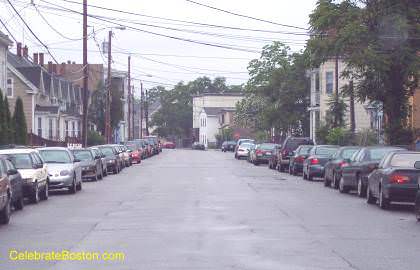