Lightning is an atmospheric discharge of electricity. There are about 16 million lightning storms each year. Lightning strikes are very common and generally do not cause a lot of damage. In Puritan times, it was often believed that natural disasters were caused by the will of God. The following is an article from the June 30, 1726 Boston Newsletter, which describes a powerful lightning strike in Boston (edited to modern English):

"Boston, Tuesday, June 28, A little past 2 this afternoon, a thick & dark cloud rising & increasing on the western board, some distant thunders were heard among us. After some intermission & no noise heard, the cloud spread quickly over us, and on a sudden [instant] broke forth a most amazing clap of thunder upon the midst of the town.

The [lightning] struck the northwest corner of Mr. Lyman's chimney; and running down to the ridge of his house, divided. Descending on the northern roof, it shivered the boards; on the southern, a main rafter and other timbers; & on both sides tore of the slate & burnt out the cornish: And as it then [ran] down perpendicular sides of the house, it then broke the windows & split their frames, and began to melt both the upper & lower ends of the jimmers & heads of the nails, to which it seemed to bend its course, in its descent to the ground.

Either the part of the meteor which run down on the south, or the air most violently expanded by it, broke into a window on the back side of the adjoining house, and so suddenly struck Mr. Gibbs on his right side next to it, threw him to the ground & stunned him; that he neither heard the thunder nor saw the lightning: And passing through the open doors of the rooms, blew a young man out into on the fore side of the house & threw him down the pavement. Some parts of their bodies were pretty numbed; but are in a great measure recovered: And though there were 4 other persons with Mr. Gibbs at the table, another in the garret while the meteor run down and went on both sides of him, & others several parts of the houses; yet through the Goodness and Care of God, there [were] no more hurt. Job 36.24. Remember that thou magnify his work which men behold!" 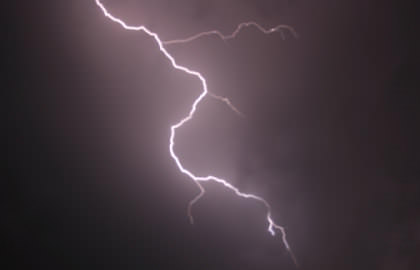