On July 31, 1973, only two people survived the crash of Delta Flight 723. The first survivor died two hours later at Mass General Hospital. Sergeant Leopold Chouinard was the sole survivor until he died on December 11, 1973. His struggle for life is described here as a memorial to his courage in the face of unrelenting physical and emotional challenges.

Twenty-year old Leopold Chouinard was returning to Air Force duty after visiting his family in Vermont. The DC-9 crashed at Logan Airport at about 11:08 am. Chouinard was sitting in the rear of the plane. After the plane crash another passenger helped him remove his seat belt, and he crawled out through a window and away from the flaming debris. The tower was unaware of the accident for about seven minutes, and members of a construction crew were the first to discover the accident and notify the fire department. Chouinard was found alive and conscious in the smoldering wreckage, and a construction worker stayed with him until an ambulance arrived. 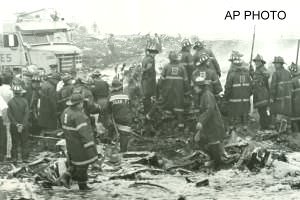 Sergeant Chouinard's foot was crushed, and he received third- degree burns on 80% of his body. He was transported to Mass General Hospital for treatment, and members of his family immediately traveled to Boston to support him. Leopold expressed great optimism to comfort his family, and told his mother "not to worry." Chouinard was engaged the night before the accident, and his fiancé said that Chouinard was quite alert and remembered everything from the crash. She stated that their wedding will go forward and also resolutely said "I love him. I will take care of him forever."

He underwent surgery on his leg on August 1. The greatest medical obstacle was finding enough healthy skin to graft over burned areas of his body. On August 13, both of his legs were amputated. A hospital representative stated that Chouinard was not discouraged after discovering he lost his legs, and expressed a strong will to live. He remained in critical condition and underwent complicated skin grafts for the next three months.

On December 3, he succumbed to pneumonia, and on December 5 his kidneys began to fail. Sergeant Leopold Chouinard tragically died on December 11 after a courageous battle to overcome incredibly traumatic injuries.

In Boston, Chouinard was referred to as the "sole survivor." Many citizens hoped and prayed for his survival and recovery. The city was more spiritual at the time, and in casual conversation people would ask God to bless and help him.