On October 4, 1960, an Eastern Airlines propeller driven Lockheed L-188 Electra crashed into the sea while attempting to take off from Logan Airport. 62 people tragically lost their lives, with only 10 people surviving.

Flight 375 bound for Philadelphia and points south took off from Logan at 5:40 pm. Six seconds after take off, a flock of up to 20,000 starlings suddenly flew into the path of the aircraft, and hundreds of the birds were ingested into the engines. As a result, two of the four engines lost power, and a third flamed-out. The plane rolled over to the left from an altitude of about 300 feet, and crashed almost vertically into the shallow water just north of the runway. 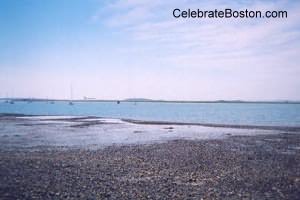 The accident scene was horrific. Soon after the crash, no part of the fuselage was visible above the surface of the water, as the impact had broke the plane up and embedded the pieces into the mud of the shallow flats.

Local residents tried to rescue survivors. People from the shore waded through thigh-deep mud, and tried to swim out and determine if bodies floating in the water were alive or not. Bystanders in small watercraft searched for survivors, which was reminiscent of the scene in the film Titanic when one of the life boats returns to look for people still alive among the many bodies floating in the water.

The debris field was only 600 feet from shore, with 100 feet of mud obstructing the rescue effort from the beach. A "human chain" was hastily put together to try and pull bodies out of the water quickly. A Boston Globe writer described how bystanders tried to save passengers: "Young boys suddenly took the stature of men. They saw death for the first time, and they were heroic."

A disturbing aspect about the accident is that it's likely more people had survived the crash, but then drowned due to the seat design. The seats were wide and buoyant, and had detached from the aircraft's floor on impact. After hitting the water, the seats rolled forward, which hurled the passengers face down into the water, and then continued to float upside down. Seats were removed from the sea with dead people still strapped into them, and were lined up on the beach near the accident site.

There were several passengers aboard Flight 375 returning home from a shoe convention that was held in Boston. There were also 15 Marine Recruits headed for Parris Island, SC on the plane. A marine that survived stated "I woke up in a boat," and had no idea how he escaped from the aircraft. Some survivors were sent to the old Winthrop Hospital, and others in critical condition were transported to Boston. A makeshift morgue was set up at the Winthrop Police Station. The mobilization of emergency responders was the greatest since the Cocoanut Grove Fire in 1942.

Some innovative research was done after the accident. Aircraft simulator tests were completed to see if seasoned pilots could have saved a plane under identical conditions of a large bird-strike, and they all failed. Live birds, unheard of today, were tossed into engines to measure the power loss (the ingestion of only 3 or 4 birds caused a power drop for several seconds). The wreckage was also re-assembled in a hanger to organize materials for testing and determine if structural failure was part of the cause (which was not the case). Even the starlings had been autopsied to ascertain their cause of death (more than 100 birds were found dead on Runway 9 after the crash).

This event still stands as the worst accident in airline history caused by a bird-strike. Some of the good results of the Electra crash were minimum ingestion standards for propeller driven and later jet aircraft, and the start of comprehensive and standardized airport wildlife management plans (in America, dumping trash at sea at that time had contributed to the increase in sea bird population for instance).

The public was fascinated with air travel in the 1950s, and even more so after introduction of the revolutionary Boeing 707 passenger jet airliner in 1958. Public uneasiness about the fantastic growth in air travel was reflected in films such as Back from Eternity, The High and the Mighty, and The Mountain. The Logan Electra bird-strike crash is a case-study in the evolution of modern aircraft accident forensics.