On August 26, 1871, a horrific train train wreck occurred at Revere, Massachusetts. A Portland Express train slammed into the rear of the Beverly local train, killing 29 people. The locomotive of the express train telescoped into the rear coach of the local, crushing and scalding people with steam and hot water as broken valves burst. Oil lamps were shattered which set the train on fire. Some people survived the wreck, but were trapped in the splintered coach and burned alive.

In addition to the main article about the Revere Disaster, the following is a narrative from the October 28, 1878 Boston Globe about the tragic accident:

"The terrible fatality at Revere will never by forgotten by the living generation, but in view of the recent horror at Wollaston, a review of it will sadly interesting. At 8.15 o'clock P.M., on [August 26, 1871], the Beverly accommodation train was on the point of leaving the Revere station, when it was run into by a Portland express, which was following it upon the same track. 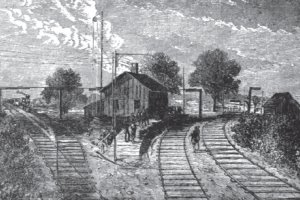 There was never an accident in this state [until then] showing more culpable negligence. At the time the accident occurred the resources of he railroad were taxed to their utmost, several camp-meetings and a brigade muster being in progress. This especially was the case in the week ending in August 26, the number of passengers having risen to 142,000 while the regular number of freight and passenger cars was increased from 152 to 191.

Great confusion resulted, and on the day of the accident but few, if any, trains left or arrived on their regular time. Towards evening, on the fatal day, the confusion was greater than ever, and trains were [dispatched] as fast as cars could be procured. All the regular evening trains left the Boston station out of time, and in the following order:

The 6.30 Saugus Branch, at about 7 o'clock; the Beverly Accommodation [local train] at 7.40, the 7 o'clock Saugus Branch, both out of time and out of place in order of trains, it being behind the Beverly train instead of before it, at 7.53, and finally the Portland express at not more than 8:05. By this delay the schedule time [gap] of more than 45 minutes between the Beverly and the Portland trains was reduced to from fifteen to twenty minutes.

At the junction of the Saugus branch with the main line at Everett there was another delay, and the original interval of time between the Beverly train and the Portland express was reduced to five minutes. In fact the Beverly accommodation train was running on the schedule time of the Portland express. The [Beverly local] conductor [in the rear car] supposed that the Saugus Branch train was the Portland express, and that the engineer and conductor had been cautioned to look out for him. He also was so confident of this fact that he did not consult his watch, and indeed, was much more at ease than the passengers, many of whom had become uneasy, if not thoroughly alarmed. When the conductor of the Portland express saw the tail lights of the Saugus train as it went around the branch, he took it for granted that the road was clear.
...
The weather on the fatal evening was exceedingly moist and disagreeable. The wind was east and blew the fog and mist from the ocean toward the land, and The Canopy Hung Heavily over the marshes of Revere.

As the [local] train came to a stop at Revere the express was less than a mile behind, plunging onward to destruction at the rate of twenty-five to thirty-miles an hour. In ordinary weather the tail lights would have been seen by the engineer of the express a mile away, but in this instance [due to heavy fog] they were not seen until the locomotive of the express was within 800 feet of the ill-fated train.

Indeed the conductor and passengers of the Beverly train were apprised of their danger a little sooner, the glare of the head-light being more powerful than the flickering rays shed by the lanterns on the rear car, but not soon enough to prevent the horrible catastrophe. The light streamed in through the door and windows of the rear car, showing faces pale as death. A hurried rush was made for the front door of the car, but haste only impeded progress, and before hardly a soul escaped there was a terrible crash and scores of agonized screams rent the air.

The majestic iron horse, as if possessed of superhuman power, ploughed its way through two-thirds of the length of the car, forcing before it in[to] one inextricable mass human beings and the seats and fixtures of the car. The smokestack of the engine swept away its truck was forced backward until it rested between the driving wheels and the tender. The entire boiler rested inside and upon the rear truck of the car while the valves were so broken as to admit the free escape of scalding steam. The lamps in nearly all the cars of the train were knocked down setting the train of fire.

The scene was horrible in the extreme. Many of the passengers were instantly killed at the first shock, but many others wedged in so tightly among the debris that it required a long time to extricate them, or lying helpless, while scalding steam or forked flames added to their peril, cried to horror-stricken lookers-on to put an end to their misery, and their screams and shrieks only added to the terrible scene.

Twenty-nine were killed or burned to death, among them the Rev. Ezra S. Gannett, pastor of the Arlington Street Church in this city and fifty seven were injured. No one not in the rear car was killed. The conductor of the Beverly train on perceiving the headlight on the locomotive of the Portland express ran back, swinging a lantern, but the engineer had discovered the danger had already signaled for down brakes and reversed the engine. The rails were damp, however, and The Wheels Didn't Catch, and when the locomotive struck the train it was traveling at the rate of ten miles an hour. The engineer and fireman saved themselves by jumping off.

The Railroad Commissioners, in their report on the accident, severely criticized the railroad for laxity in discipline, for deficiency in rolling stock, and for attempting to do too much in the excursion business."